LEMON GROVE - A suspect in an East County home invasion that ended in a shootout that left his accomplice dead and a resident wounded remained at large early Wednesday.

The suspect sought by authorities was one of two gun-wielding men who entered a house in the 2400 block of Edding Drive in Lemon Grove shortly before 2 a.m. Tuesday and confronted the 44-year-old homeowner, Francisco Suarez Sr., and his 22-year-old son, Francisco Suarez Jr., according to sheriff's officials.

A scuffle ensued in which one of the intruders shot the younger victim, whose father then returned fire. 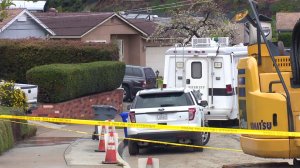 The wounded suspect died at the scene, and his accomplice fled, according to sheriff's Lt. Kenneth Nelson. A description of the second suspect was not immediately available.

Deputies arrived to find Francisco Suarez Jr. in his front yard, suffering from a gunshot wound. Paramedics took him to a hospital for treatment of trauma that was not considered life-threatening. The older victim was unhurt, Nelson said.