SAN DIEGO – As vector control crews hand-sprayed the Grant Hill neighborhood in the fight against Zika virus, upset parents returned to Kimbrough Elementary School to pull their kids out.

Four blocks in the Grant Hill neighborhood were sprayed for mosquitoes Monday. It was the fourth area in San Diego County to be sprayed in recent weeks.

Dodson Street served as the west border, with Island Avenue to the North and K streets to the south. The eastern border was J Street. 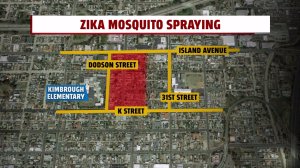 A parent, who wanted to remain anonymous, said they were not warned of the spraying and was among several parents who pulled their children out of school Monday morning.

“They don’t say nothing, they spray for the mosquito,” said the parent.

SDUSD officials declined to release numbers of how many students left school.

Syd Stevens of Non-Toxic San Diego was in front of Kimbrough Elementary protesting and handing out flyers about the spraying.

“Almost no one knew about the spraying today,” said Stevens. “It’s not healthy at all and to call this treatment adult mosquito treatment something healthy is an oxymoron."

“The residents were notified and so were the principals,” said Dr. Eric McDonald, Deputy Public Health Officer, San Diego County. He said the schools were told they could take extra precautions. “By being sure the children were indoors during the time that the spraying was actually being done.”

McDonald said the effects of the spray are minimal and low-risk.

“This is a chemical that breaks down in 20 to 30 minutes with exposure to sunlight,” said McDonald.

The pesticide is aimed at killing the Aedes mosquito. So far, the insect has primarily been found in South San Diego, so far none carrying the Zika virus.

McDonald said when it comes to any disease, the county is not taking any chances.