SAN DIEGO — An Iranian man with a legal visa finally landed in San Diego amid the travel ban controversy.

Amir Bahdor’s story should have played out like thousands of others applying for an immigrant visa. 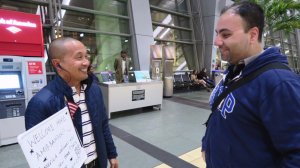 “Doesn’t matter what country you’re from, everyone follows the same procedure,” said his lawyer Carl Balediata.

Applicants go through an extensive interview process and background check, one that can take seven years. Amir did all that.

“The officer congratulated me and told me I was approved and welcome to the United States. I thought it was all fine,” said Bahdor.

But then President Trump took office and issued an executive order that temporarily halted immigration from seven majority-Muslim countries.

“That’s when all the problems started,” said Balediata.

Trump’s travel ban included Iran. Bahdor, 34, with a Master’s degree in computer programming, was caught in the middle.

“I said, ‘get on the first flight that you can find because this ban, I think it applies to you guys,’” said Balediata.

Amir tried twice but was turned away at the airport gate. He said our president should trust his own government’s extensive screening process.

Over the weekend, a federal judge suspended implementation of the ban nationwide. The suspension was upheld by another judge in San Francisco following a challenge to the suspension from the White House.

On his third attempt, just this weekend, Amir finally made it on a plane shortly after the stay was put into place.

“I love San Diego and American people are so very nice. Everything here is very good. Yes I like it here and I want to live [here] and make a better life,” said Bahdor.

Attorney Carl Balediata went out of his way to make sure Amir felt welcomed. He helped get him his first place since Amir had to move so quickly.

CHULA VISTA, Calif. - Several Chula Vista community leaders joined a congregation from Victory Outreach Church of San Ysidro on Saturday to pray for peace and healing amid a period of national unrest following the police killing of George Floyd.

In Chula Vista's Memorial Park, the city's mayor, Mary Casillas Salas, called for community members to play a larger role in fighting injustices. Her remarks came on a day where thousands of San Diego County residents did just that with various demonstrations taking place Saturday in downtown San Diego, Carlsbad and Vista, among others.

According to San Diego Sector Border Patrol, agents received a report at about 10:30 a.m. from the Joint Harbor Operations Center that a craft had landed at the beach. Agents apprehended 10 men and three women in the incident with two additional individuals fleeing once the boat landed, Supervisory Border Patrol Agent Jeff Stephenson said.

(CNN) -- As the US reopens in phases, more and more jobs are being added back to the economy. Unemployment officially fell to 13.3% in May as employers added 2.5 million jobs, the best month for job growth since the Bureau of Labor Statistics started tracking the data in 1939.

The Labor Department noted that during the pandemic, millions of workers were misclassified as "employed but not at work," when they should have been counted as "unemployed on temporary layoff." If it weren't for those misclassifications, the unemployment rate would have been higher — around 19.2% in April and 16.1% in May, not including seasonal adjustments.

Protesters pour into DC for city’s largest demonstration yet