SAN DIEGO - A group of investors who applied for a Major League Soccer franchise and released a concept plan for the Qualcomm Stadium property will unveil a detailed site plan Monday. 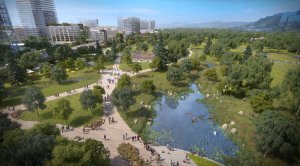 Renderings of joint-use stadium for professional soccer and college football and a sports and entertainment district will be released Monday.

A few weeks ago, investors who first proposed building a new stadium in Mission Valley submitted an application for a Major League Soccer expansion franchise in San Diego to league Commissioner Don Garber.

The 24-team MLS is entertaining bids from potential ownership groups to add new members. At a news conference, Garber said he anticipated receiving a dozen applications and planned to accept four of them.

“We would like nothing more than to deliver the world’s most popular sport to one of the world’s greatest cities,” said businessman Mike Stone, whose proposal also includes a soccer academy to foster young talent.  “Our goal is to make San Diego the epicenter of soccer in the United States.”

The local bid comes more than a month after the National Football League's Chargers announced plans to move to Los Angeles after 56 seasons in San Diego.

City officials are determining how long to keep open Qualcomm Stadium, which is far too large for the MLS and the San Diego State University football team. The Aztecs have a lease through the 2018 season, and are negotiating a two-year extension to provide time to find a new home.

SDSU has been discussing options with the local MLS group, led by investor Mike Stone and Juan Carlos Rodriguez, the president of Univision Deportes. School officials have also been in touch with the Padres about making renovations that would allow football to be played at Petco Park.