SAN DIEGO -- Set your alarms, space fans -- if you can drag yourself out of bed on Wednesday, you're in for a treat. 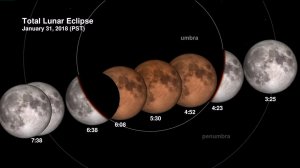 The pre-dawn hours of January 31 will play host to an incredibly rare celestial convergence -- a "super blue blood moon."

To prepare you for the lunar triple whammy, here's your all-you-need-to-know guide.

What is a 'super blue blood moon'?

It may sound like the apocalypse is nigh, so let's break it down by its three parts: "super," "blue" and "blood."

So, a "supermoon" is when a full moon occurs at the same time as its perigee, the closest point of the moon's orbit with Earth. The result: the moon appears larger than normal and NASA is predicting this one will be 14% brighter than usual.

Chances are you have used the phrase "once in a blue moon" -- but have you ever wondered where it came from? The well-known idiom actually refers to the rare instance when there is a second full moon in a calendar month. The first supermoon of 2018 -- which took place on New Year's Day -- was previously described by NASA as the "biggest and brightest" one expected for the entire year.

Then completing this "lunar trifecta" is the "blood" element. Although it does not have a scientific definition, a "blood moon" occurs during a lunar eclipse when faint red sunbeams peek out around the edges of the moon, giving it a reddish, copper color.

Where can I see it?

Eager stargazers living in North America, Alaska or Hawaii will be able to see the eclipse before sunrise on Wednesday, according to NASA. For those in the Middle East, Asia, eastern Russia, Australia and New Zealand, the "super blue blood moon" will be visible during moonrise on the morning of January 31.

As long as the weather doesn't try to ruin things, observers in Alaska, Australia, eastern Asia and Hawaii will be able to experience the whole phenomenon from start to finish.

For those living in the US, NASA says the best spots to watch the entire celestial show will be in California and western Canada.

"Weather permitting, the West Coast, Alaska and Hawaii will have a spectacular view of totality from start to finish," said George Johnston, lunar blogger at NASA, in a press statement. "Unfortunately, eclipse viewing will be more challenging in the eastern time zone. The eclipse begins at 5.51 a.m. ET, as the moon is about to set in the western sky, and the sky is getting lighter in the east."

For observers living in New York or Washington D.C., the space agency suggests a 6.45 a.m. ET start for the best viewing.

"Your best opportunity if you live in the east is to head outside about 6.45 a.m. and get to a high place to watch the start of the eclipse," Johnston said. "Make sure you have a clear line of sight to the horizon in the west, opposite from where the sun will rise."

Where the moon is covered by the Earth's shadow, known as the period of totality, it will last just over one and a quarter hours, according to EarthSky. And unlike a solar eclipse, a lunar eclipse is perfectly safe to watch in the night with the naked eye.

And fear not luna-tic's, Virtual Telescope will be streaming the event live for those of you unable to view it up close.

There are usually a couple of lunar eclipses each year so if you do miss it this time around, the next one will happen on July 27 -- though it won't be visible in North America. It'll be a long wait for skywatchers in the US as Johnston predicts the next visible lunar eclipse will be on January 21, 2019.