EL CAJON, Calif. — The city of El Cajon Wednesday outlined steps that have been taken, or are in the works, 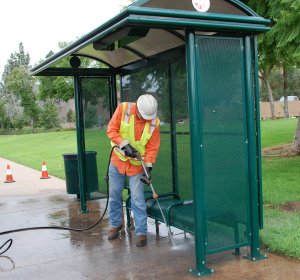 to deal with an outbreak of hepatitis A that has plagued San Diego and other cities in the region.

While most of the more than 400 cases have occurred in San Diego, quite a few people in the East County city have been sickened by the illness — which attacks the liver. The county Health and Human Services Agency said it is hard to get a fix on exact numbers because of the transient nature of most victims.

According to the HHSA, about two-thirds of outbreak cases struck the homeless or drug users.

City of El Cajon officials said new hand-washing stations have been, or will be set up at the library, Prescott Promenade and trolley stations.

The city is also power-washing sidewalks, curbs and benches in areas where homeless congregate, and has requested that the Metropolitan Transit System power-wash its trolley platforms. Restrooms in municipal buildings are being washed with a cleanser effective against hepatitis A, city officials said.

The city said it has also posted a page on its website and Facebook account about the outbreak, prevention tips and city efforts to address the issue.