SAN DIEGO – People who returned from places with Zika virus outbreaks will be turned away from the San Diego Blood Bank for the next four weeks, official said Thursday.

The waiting period was recommended Monday by the American Association of Blood Banks for people who have been to Mexico, South America or certain Pacific locales.

“We have notices up when people walk up to our counter,” said Robert Baracz of the SDBB. He said that, as of late morning, that no one had expressed any concern about the signs.

“In response to the stories regarding Zika Virus, we are asking donors who have traveled to Mexico, the Caribbean, and/or Central or South America to hold off donating blood until 28 days after they return to the United States, as a precautionary measure,” the San Diego Blood Bank posted on FOX 5’s Facebook page. 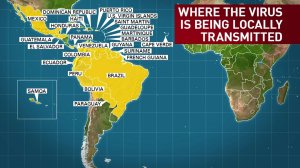 The illness has gained increasing notice in the past few weeks, after it was tentatively linked in Brazil to a condition called microcephaly in which babies with mothers sickened by Zika are born with small heads and have a shorter life expectancy.

The U.S. Centers for Disease Control and Prevention has issued a travel advisory for pregnant women planning to go to an affected country.

Health officials have said 80 percent of those who contract the Zika virus don’t get sick or have to deal with relatively minor symptoms. The disease is primarily spread by mosquitoes, but a sexually transmitted case recently occurred in Dallas.

The San Diego County Health and Human Services said last week that only two cases have been observed locally, one in July 2014, a traveler who returned from the Cook Islands, and the other last July in someone who visited Christmas Island. Both recovered after treatment. Zika outbreaks were occurring on both islands at the time.

“It shouldn’t be a reason to scare anyone from coming in,” Baracz said.

The national blood bank organization also recommended that people contact their donor center if they already gave blood soon after returning home from somewhere with a Zika outbreak. Baracz said packages of donated blood are labeled, and can be tracked.

The association said its recommendations apply to two other tropical diseases — the chikungunya and dengue viruses.

(CNN) -- After more than three months of shutdowns, mandatory quarantines, self-imposed exile from society and working from home, nature-lovers looking for a well-earned breath of fresh air could face a possible collision course between coronavirus and tick-borne illnesses this summer.

There have been 22 rodents in San Diego County who have tested positive for the hantavirus this year, according to the department. The mice collected in the open space in Campo were two California mice, one deer mouse, and one brush mouse.

Dr. Brad Baker of Baker Orthodontics says he has changed his practice to make sure patients can safely resume treatment amid the coronavirus pandemic. Patients and their parents must now wait on the sidewalk and call the office before the enter the facility to prevent the spread of the coronavirus. He sees patients using full personal protective equipment including masks, face shields, gowns and more.