SAN DIEGO — If you have a couple of cans of Party Animal dog food in the house, you may want to pull them out and take a close look at the label. 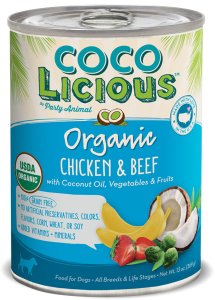 Party Animals, a California-based pet food maker, is recalling two lots from its line of Cocolicious dog foods after some cans in Texas tested positive for pentobarbital — a chemical that’s used to euthanize animals.

In a statement on its website, Party Animal said a customer in Texas had given Cocolicious samples to a lab and the dog food tested positive for pentobarbital. Party Animal is asking for those test results, and “out of an abundance of caution” is recalling the two lots of dog food sold nationwide. The company is also sending cans of its dog foods to an independent lab for testing.

The recalled cans are:

Pet owners who have bought either lot of dog food are asked to return the cans where they were purchased for a full refund.

Back in February Evanger, a pet food company based in Illinois, recalled its dog foods after cans tainted with pentobarbital were making dogs sick.

Timothy Ray Brown, the first person known to have been cured of HIV infection, says he is now terminally ill from a recurrence of the cancer that prompted his historic treatment 12 years ago.

Brown, dubbed “the Berlin patient” because of where he lived at the time, had a transplant from a donor with a rare, natural resistance to the AIDS virus. For years, that was thought to have cured his leukemia and his HIV infection, and he still shows no signs of HIV.

SAN DIEGO (CNS) - In a paper published Thursday, a team led by researchers at UC San Diego School of Medicine used artificial intelligence to analyze language patterns of older adults to discern degrees of loneliness, which could help blunt rising rates of suicides and opioid use.

According to the report, published in the American Journal of Geriatric Psychiatry, accurately assessing the breadth and depth of societal loneliness is daunting being limited by available tools such as self-reports.

Which face masks are most effective?

ELMIRA, N.Y. (WETM) - After months of going through the coronavirus pandemic, the nation has come to terms with the importance of wearing face masks when they are within six feet of other people and cannot be socially distanced, as recommended by the CDC.