HASTINGS, Mich. — A Michigan mom has found a unique way to honor the life of her daughter two years after she had a miscarriage.

“I place a rock on there just to let that mom know that I see they are grieving. I see your baby’s name, and I know they existed. I just wander back and forth and read each headstone and figure out the dates in my head, and I place a rock.”

Wieringa began leaving the rocks on graves a few weeks ago and says she has noticed a change in herself. 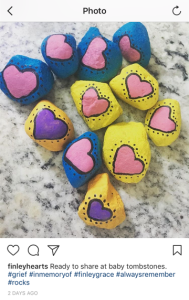 While she was 17 weeks pregnant with her third daughter, her doctor discovered her baby no longer had a heartbeat.

“As soon as he put the wand on my stomach, I knew instantly that she was gone. Her body wasn’t moving, and there was no heartbeat.”

The next day, Nicole as induced and gave birth to Finley Grace.

“Ten perfect fingers, 10 perfect toes, just too small. We buried her in Michigan about a week later.”

“It’s really quiet. It’s quiet in the room. No one knows what to say to you for a long time, and I think it’s really lonely. It’s a very lonely feeling.”

Doctors don’t know what caused the late miscarriage but think it might’ve been a blood clot in her placenta.

Wieringa gave birth to another daughter, Irelynn, almost a year after losing Finley. She calls Irelynn her rainbow child.