BONSALL, Calif. – Three firefighters were aboard a fire engine when it crashed into a ditch in Bonsall Thursday morning, Cal Fire officials said.

Video showed the Deer Springs Fire Department Engine 11 on its side in the ditch at N. Old Highway 395 between Gopher Canyon and Lilac roads around 6:15 a.m. 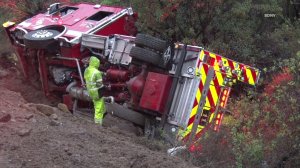 The firefighters were able to get out of the damaged truck on their own and were taken to a hospital to be evaluated as a precaution, authorities said. They were later released from the hospital.

The cause of the crash was under investigation, according to Cal Fire Capt. Issac Sanchez.

The roads were slick in the area due to a winter storm moving through San Diego County. Motorists were urged to avoid Old Highway 395 between Circle R Drive and Camino Del Rey.

Stay cool: Residents warned that hot weather will last into next week