SAN DIEGO – One man was hospitalized Tuesday after a fire broke out at a mixed-use building in the Mission Beach area, authorities said.

The blaze broke out shortly before 6:55 a.m. at a two-story mixed-use building at 716 Ventura Place near Belmont Park, San Diego Fire-Rescue spokeswoman Monica Munoz said. The building was next to the popular restaurant Sandbar.

Crews arrived at the building, which has residential units on top of businesses, and knocked down the flames in around 30 minutes, Munoz said.

Watch as SkyFOX flew over the firefighters

The victim was transported to UCSD Medical Center in Hillcrest, Munoz said. The extent of the victim’s injuries was not immediately available. A witness who saw firefighters rescue the victim says the victim looked badly ‘charred’.

Munoz also added that the second story residential structures sustained fire damage. The first floor businesses Dryer’s Ice Cream and Kojack’s were not damaged by the fire, but did sustain water damage. 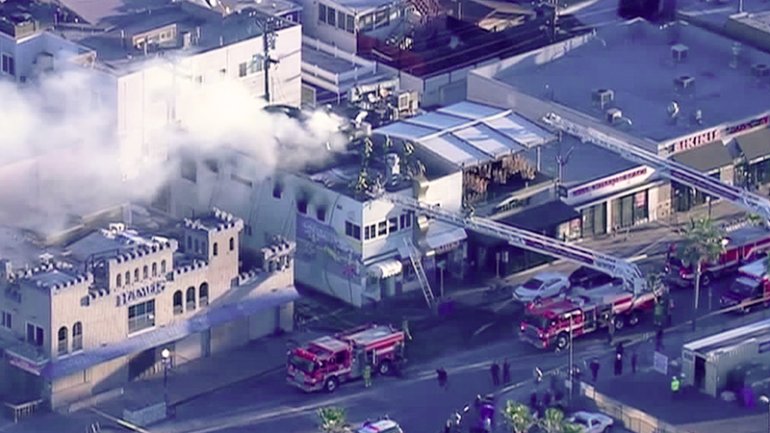 Fire investigators determined Tuesday afternoon that damages were estimated at $500,000 to the building with $100,000 worth interior contents.

They also determined the fire started on the roof.

The exact cause of the fire remains under investigation.

SPRING VALLEY, Calif. - A pedestrian was hit and killed by a teenage driver in a Volvo Friday night in Spring Valley, California Highway Patrol officers said.

According to CHP, the crash happened at approximately 7:09 p.m. on Sweetwater Road north of Saint George Street. Officers say the pedestrian was hit when he stepped out from the sidewalk to cross the street and wound up "directly in front of the Volvo."

CHULA VISTA, Calif. -- The monthlong Republic Services sanitation workers' strike may be over, but the cleanup effort continues in San Diego and the South Bay.

Signs of progress can be seen throughout Chula Vista as more and more trash is hauled away after the stalemate between Republic Services and some 250 union workers came to a close Monday. But even with trash service resuming, many customers wonder about refunds after paying for a month with no service.

Deputies say gunfire was reported around 7:20 p.m. on Diamondback Drive near Blackhorse Drive, east of state Route 67. Authorities found two men suffering from gunshot wounds there. Both were taken to a local hospital, where they died, according to the department. Neither man was publicly identified.