SAN DIEGO — A popular restaurant and bar in Lakeside caught fire early Saturday morning, causing extensive damage to the kitchen and roof, and smoke and water damage to the rest of the business, according to the Lakeside Fire District. 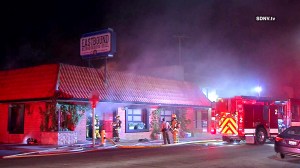 The fire broke out in the kitchen shortly after 4 a.m. at the Eastbound Bar & Grill in the 10000 block of Maine Avenue in the old downtown Lakeside business district, Capt. Scott Culkin said in a statement. Firefighters had the flames out within 10 minutes of arriving and were able to spare the front seating area of the restaurant.

Twelve crews  from Lakeside, Santee and Heartland Fire responded to the blaze and were credited with saving the business from becoming a total loss.

The cause of the fire was under investigation, although the owners told FOX 5 they believe it was due to faulty electrical wiring.

“I had emails sent to me before I even knew about [the fire],” said Julia Geygan, manager of the restaurant.

Eastbound is known for doing supporting the Lakeside community, including hosting fundraisers and partnering with local causes. Now, the community is reaching out to help them.

“It’s crazy the amount of support we’re receiving,” said Geygan.  “We definitely have our work cut out for us. We will need to do a complete rebuild of our kitchen.”

The owners hope to have the restaurant fully reopened within six weeks.

An estimated dollar amount for the loss was not released by fire officials.

EL PASO, Texas (Border Report)– The man responsible for safeguarding the nation’s security on Thursday did not publicly address the record surge in unauthorized migration, but emphatically defended the change in philosophy taking place at America’s borders.

“The policies have changed so dramatically between the Trump administration and the Biden administration. We have ended policies of cruelty that defined the prior administration," Department of Homeland Security Secretary Alejandro Mayorkas told KTVO while on a work trip to El Paso.

SAN DIEGO (Border Report) -- Earlier this month, and seemingly overnight, the stench of raw sewage permeated the air along the border between San Diego and Tijuana.

It went on for days.

SACRAMENTO, Calif. (KTXL) — Ahead of a key vote to approve a single-payer, state-run health care system in California, the Progressive Caucus of the California Democratic Party is preparing to take away party endorsements from Assembly members who reject the proposal.