SAN DIEGO – Two men were killed, a woman in their car was badly injured, an off-duty police officer suffered lesser injuries, and a suspected drunk driver was under arrest Wednesday morning following a fiery overnight crash on Interstate 15 in the Scripps Ranch area.

The deadly collision happened about 11:45 p.m. Tuesday on northbound I- 15 approaching the Miramar Road and Pomerado Road offramp, the California Highway Patrol said. As of 7:45 a.m., some regular lanes of the freeway were still closed and HOV Express Lanes were opened to all traffic.

Authorities believe the driver of a Ford Mustang was speeding and driving recklessly when he crashed into the back of a Toyota Corolla, causing the Corolla to spin out of control and end up disabled in the path of oncoming traffic. The Mustang crashed off the side of the freeway. 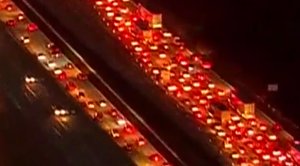 Witnesses told CHP dispatchers that the Mustang’s driver fled the area on foot. Police later found that man during a search that involved a law enforcement helicopter, and he was arrested on suspicion of driving under the influence.

All northbound lanes of I-15 were closed a little after midnight and the freeway remained shut down as of 6:30 a.m., according to the CHP and Caltrans San Diego. Amid heavy rush-hour traffic, two northbound Express Lanes normally reserved for carpool drivers were opened to all drivers, but traffic remained extremely heavy from Clairemont Mesa Boulevard to the crash scene.

SAN DIEGO -- Police chased a driver through Linda Vista and got him to surrender after he jumped out and ran into a canyon, hiding under a bush, according to the San Diego Police Department.

The chase started near Interstate 8 in the Fashion Valley area some time after 11 p.m. Officers checked the plates on the driver's car and found the vehicle was reported stolen. The man refused to pull over, an SDPD spokesperson said, and the officers started chasing him through the city.