SAN DIEGO — The Helen Woodward Animal Center warned San Diego County residents Thursday to watch out for coyotes as the weather gets warmer, an announcement spurred by multiple coyote attacks and encounters in recent weeks.

According to the shelter, coyote encounters may have increased recently due to hotter seasonal weather, housing development and last year’s fire season. In the last week, the shelter has received reports of three pets killed by coyotes and several more encounters and close calls. 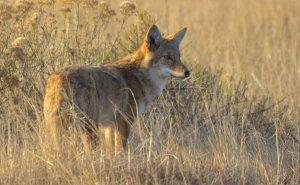 One such close call came late last month when the shelter received a report of a dog in the Creekside and Brengle Terrace neighborhoods being constantly chased by several coyotes. Local Realtor Babs Fry, who also runs a nonprofit that rescues hard-to-catch pets, secured the dog, nicknamed Roadrunner, and brought him to the shelter.

“We were concerned that Roadrunner may have been bitten and would require rabies shots and months of down time, but he was one of the lucky ones who managed to escape without incident,” said Madison Hughes, the shelter’s animal health supervisor.

Residents are advised to avoid leaving pet food or water outside overnight and to constantly supervise pets while they’re outdoors. The shelter also suggested keeping cats inside overnight, walking dogs on a leash at all times and bringing a whistle or bear spray on walks or hikes to ward off coyotes.

If residents do cross paths with a coyote, they should make loud noises and throw things at the animal rather than running from it, according to shelter officials. They said the goal should be to deter the coyote from coming back, especially if its spotted in a residential area.