SAN DIEGO – The annual Great California ShakeOut Drill held Thursday, with nearly a million San Diegans joining people across the state — and around the world — as they drop, cover and hold to practice their readiness for a major earthquake.

More than 930,000 San Diego County residents registered at www.ShakeOut.org to participate in the drill, including students, local government agencies, nonprofit organizations and families. Across California, more than 10.4 million people signed up for the exercise, and nearly 55 million people were registered worldwide.

The drill itself was held at 10:19 a.m. — the time reflecting the date of Oct. 19. Participants were instructed to “drop” to the ground, take “cover” under a desk, table or other sturdy surface and “hold on” for 60 seconds, as if a major earthquake were occurring.

“To react quickly you must practice often,” according to ShakeOut organizers. “You may only have seconds to protect yourself in an earthquake, before strong shaking knocks you down or drops something on you. Practicing helps you be ready to respond.”

During an actual earthquake, people who are outdoors should find a clear spot away from trees, buildings and power lines, then drop, cover and hold on. People who are driving should pull over to a clear area, stop and stay seated with seatbelt fastened until the shaking stops. When the quake ends, motorists should proceed with caution and avoid bridges or ramps that may have been damaged. 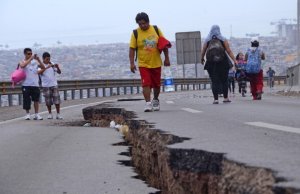 Officials in San Diego said the city’s Office of Homeland Security is a good source to help residents plan for a disaster.

“The key to your family’s safety is preparedness,” said John Valencia, executive director of the city of San Diego’s Office of Homeland Security. “By providing residents with information and resources to be better prepared, the City promotes community resilience and is better able to support and assist those in need during emergencies and disasters.”

City officials urged residents to sign up with Alert San Diego to get emergency information sent to their mobile phones, or download the San Diego Emergency App “to receive the latest information when disaster strikes.”

ShakeOut organizers note that many Californians — like young people or those who recently moved to the state — have not experienced a damaging earthquake.

“While some areas of California are more likely to have earthquakes than others, all of California is at higher risk compared to the rest of the country. You could be anywhere when an earthquake strikes: at home, at work, at school or even on vacation.”

According to the USGS, some 2,000 people would die, tens of thousands would be injured and more than $200 billion in damage would result from a magnitude-7.8 or larger quake, which would have 50 times the intensity of the Jan. 17, 1994, Northridge earthquake. Hundreds of aftershocks would follow, a few of them nearly as big as the original event, according to the USGS.

Californians should be prepared to be self-sufficient for 72 hours following an earthquake or other major disaster, officials say. That includes having a first-aid kit, medications, food and enough water for each member of a household to drink one gallon per day for at least 72 hours, according to local and state officials.

Homeowners and renters should also know how to turn off the gas in their house or apartment in case of leaks.

Large quakes prompt tsunami warning for Hawaii, but not SoCal

LOS ANGELES (CNS) - The Southern California coast is not expected to face any tsunami danger from a series of powerful earthquakes that struck Thursday off the coast of New Zealand.

The initial quakes registered magnitudes of 7.3 and 7.4, according to the U.S. Geological Survey. Around midday, and more powerful temblor measuring 8.1 occurred.

Chipotle, e.l.f. team up to satisfy your hunger for beauty