There were no immediate reports of damage or injuries.

A map from USGS shows someone in San Diego reported feeling “light shaking.” 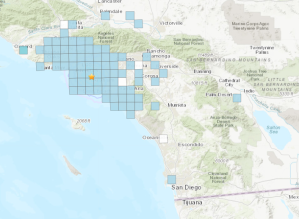 “The (magnitude) 3.7 in Compton is near but not on the Newport- Inglewood fault,” Dr. Lucy Jones, seismologist, founder and chief scientist at The Dr. Lucy Jones Center for Science and Society, tweeted Friday morning. “It was also very deep (15 miles) so no one was really close to it. Very similar to a (magnitude) 4.0 (on) Oct. 28, 2001, which was (about) a mile northwest and just about as deep.”

There were “about a dozen burglar alarm calls” within approximately 20 minutes of the earthquake, but “otherwise business as usual,” according to a tweet from the Los Angeles Police Department’s Communications Division, which also reported that Los Angeles’ 911 system “is fully operational.”

The Los Angeles County Sheriff’s Department had no reports of damage or injuries.

The quake, which had a preliminary magnitude of 2.7, struck just northwest of Lakeside around 7:15 a.m., according to U.S. Geological Survey.

Utah struck by strongest earthquake since 1992

The 5.7 quake was centered about 10 miles west of Salt Lake City, starting at 7:09 a.m. MT, the US Geological Survey said.

FERNDALE, Calif., (AP) — The U.S. Geological Survey says a magnitude 5.8 earthquake struck a spot off the coast of Northern California on Sunday.

The USGS says the earthquake hit at 6:59 p.m. and was centered in a spot 55.5 miles west of Ferndale, a town of about 1,300 people along the Pacific Coast.