SAN DIEGO -- A residential burglary suspect led officers on a 12-minute road chase from Del Mar Heights to Pacific Beach Friday, tossing a bag of loot onto Interstate 5 before pulling over near Mission Bay High School and surrendering, authorities reported. 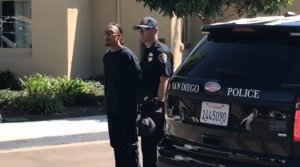 A housekeeper who works at a home in the 2400 block of Vantage Way in San Diego discovered shortly before 10:30 a.m. that the residence had been ransacked, then saw a young man driving off in a car belonging to the victims, according to police.

About seven minutes later, patrol personnel spotted the stolen light-green Nissan sedan a few blocks from the scene of the home invasion and tried to make a traffic stop, Officer Tony Martinez said. The suspect refused to yield, drove off to the west and entered nearby I-5.

While fleeing to the south, the driver of the Nissan managed to avoid a tire-flattening spike strip officers tossed onto the freeway in his path and tossed a sack of stolen jewelry out of the car, Martinez said.

He then exited onto Garnet Avenue and headed west, continuing to flee for about a half-mile before pulling to a stop on Culver Street, just north of Grand Avenue. At that point, officers took him into custody without further incident.

The suspect's name was not immediately available.