SAN DIEGO – A driver only suffered minor injuries after slamming into a semi-truck in Clairemont Monday afternoon, according to police.

A semi-truck was making a U-turn on Clairemont Drive near Chippewa Court around 12:40 p.m. when the crash happened, according to San Diego police.

The driver was pulled from the crumpled gray Hyundai SUV and taken to a hospital, police said.  The truck driver was uninjured.

Roads throughout San Diego were slick due to a series of winter storms moving through the county. 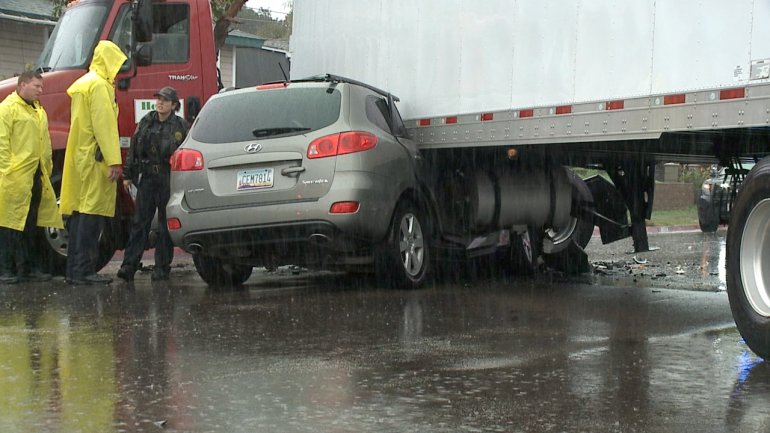 OCEANSIDE, Calif. - Authorities Monday are in a standoff with a 20-year-old man they say stabbed his wife in Oceanside before running into an apartment.

As of 9:30 p.m., the standoff is still ongoing. At about 5:30 p.m., Oceanside police say the man was seen dragging a woman outside of the Mission Hills Apartments on Mission Avenue and Old Grove Road. Police were dispatched to the complex Monday on a domestic violence call.

WASHINGTON (COVERS) -- If you thought U.S. election betting was over following the results of the 2020 presidential election last fall, boy were you wrong. Sportsbooks across the pond continue to offer political betting odds, with the latest being inauguration props on the board for Joe Biden's swearing-in ceremony on Wednesday, January 20.

Inauguration Day features plenty of hoopla – Tom Hanks is hosting and there will be performances from Lady Gaga and J. Lo – and the day's events will begin at noon ET with Joe Biden taking the oath of office. So let's dig into the political odds with some of the best Presidential Inauguration Day odds and prop bets available.

WASHINGTON (Reuters) — The acting Pentagon chief said on Monday the FBI is assisting the U.S. military in vetting more than 25,000 National Guard troops being deployed to assist in protecting the U.S. Capitol around President-elect Joe Biden's inauguration for potential security concerns.

After the Jan. 6 Capitol assault by supporters of President Donald Trump that resulted in five deaths and sent lawmakers into hiding, the U.S. government has imposed unprecedented security surrounding the Capitol, including non-scalable fences rimmed with razor wire and a large security zone that the public is barred from.