SAN DIEGO — The San Diego Humane Society was called out Tuesday night to rescue a dog that was stuck in a sinkhole on a Rancho Peñasquitos street. 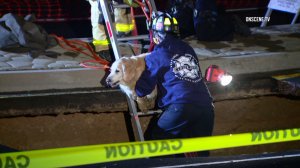 A 10-year-old golden retriever was walking with its owner near Los Peñasquitos Canyon Trail when it ran over to the sinkhole and fell in, a witness said. San Diego Humane Society team assisted San Diego Fire-Rescue Department with the rescue.

A firefighter was seen carrying “Ruby” out of the 20-foot-wide sinkhole around 11 p.m. The uninjured dog was reunited with her owner.

Rancho Peñasquitos was the latest area of the county to close a road due to a major sinkhole.

The westbound lanes on Park Village Road were blocked Tuesday morning after a sinkhole formed near the median.  San Diego police rerouted traffic to allow drivers to pick up students at Park Village Elementary School.

“It truly is a sinkhole. It wasn’t at 8:10 this morning. It was just a dip that our car — we felt it and said that’s a new sensation because we ride this all the time. That was a new sensation.” said resident Leslie Braslawsky.

The road collapsed following a series of winter storms in San Diego County.

San Diego city officials say the cause is a collapsed storm drain running under the street.  That pipe is 48 inches in diameter and made of corrugated metal.  It was installed sometime between 1986-88.

Officials are trying to scope the pipe for a damage assessment, which means running a video probe into it — but there’s too much running water hampering efforts.

In the meantime, San Diego Public Works was drafting an emergency repair contract for an outside contractor so that repairs can begin shortly after the damage assessment is completed.  For now, it is unknown when repairs can begin and when the road will reopen.

City officials are concerned the sinkhole could widen.  They are also preparing an updated traffic control plan should they need to close more lanes.  Crews will be on hand throughout the night to monitor the sinkhole.

Sinkholes have been reported at several other locations in the county in recent weeks. An elementary school near Camp Pendleton closed Tuesday due to a sinkhole on a nearby road.  A sinkhole also formed on a residential street in Spring Valley Monday.