DENVER – A deputy was killed and four other officers were injured in an “ambush type” shooting following a disturbance call in a Denver suburb Sunday morning, according to the Douglas County Sheriff’s Office.

Two civilians were also shot by the suspect, who was also killed during the incident.

The four injured officers are in stable condition, the sheriff said.

“He knew we were coming,” the sheriff said.

The incident occurred about 5:15 a.m. at the Copper Canyon Apartments in Highlands Ranch, about 20 miles south of Denver.

The sheriff said four deputies initially responded to the reported dispute when the suspect began firing at them “almost immediately.”

More than 100 rounds were shot during the attack, he said.

The deputies were wearing ballistic vests but were shot in areas the vest didn’t cover, Spurlock said.

As the injured deputies were getting out of the area, additional deputies arrived and secured the scene.

At some point, the suspect fired a quick succession of shots. Parrish suffered mortal wounds, Spurlock said he was told by a doctor at the emergency room.

“They all went down within almost seconds of each other so it was more of an ambush type of attack on our officers,” Spurlock said.

The suspect was killed almost two hours later during a shootout with a tactical team, the sheriff said.

A motorcade accompanied the fallen officer from a hospital in nearby Littleton.

The suspect’s roommate, who was home, was not wounded. The two injured citizens apparently were not in the apartment.

It was the second time deputies had gone to the apartment Sunday. There was another call at about 1:30 a.m., but when deputies arrived there was no noise.

The four injured officers have been identified as Mike Doyle, 28, Taylor Davis, 30, Jeffrey Pelle, 32, of the Douglas County Sheriff’s Department, and Tom O’Donnell, 41, a police officer with the Castle Rock Police Department.

Spurlock said law enforcement officers in the metropolitan area were familiar with the suspect, but he did not have a previous arrest record.

Residents in the area were ordered to shelter in place during the investigation.

“Any citizens in the affected area are instructed to shelter in place, avoid windows and stay away from exterior walls,” the sheriff’s office tweeted.

An emergency shelter was set up at a recreation center in the area during the investigation for anyone who was displaced during the incident.

The shooting was being monitored by the FBI in Denver, officials said in a tweet. 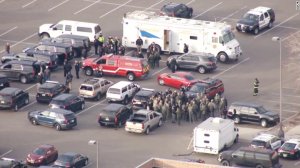 “Our thoughts and prayers are with our law enforcement partners and all those impacted by today’s senseless act of violence,” FBI officials tweeted Saturday.

President Trump tweeted his “deepest condolences to the victims of the terrible shooting in Douglas County … and their families.”

Steven Silknitter, a resident of the Copper Canyon apartment complex, said he rushed home to check on his fiancee after hearing of the shooting and arrived to hear a “barrage of gunfire exchange.”

The area was blocked off, and Silknitter said he saw at least 20 police vehicles.

“It’s the last thing I would have thought of at my complex,” he said. “It’s like something out of a movie.”

A GoFundMe account set up for the Parrish’s family described the deputy as an adrenaline junkie who enjoyed snowboarding.

“Zack didn’t back down to any challenges or fear,” the page reads.

Parrish had a career in sales before fulfilling his dream of becoming a law enforcement officer. He worked at the Castle Rock Police Department before joining the Douglas County Sheriff’s Department.

“Zack was selfless and a true friend to anyone that knew him,” the page reads.