CHULA VISTA, Calif. -- Four people were hospitalized Sunday afternoon when a toxic gas leaked into a Chula Vista Costco store, prompting an evacuation, according to authorities.

A forklift being driven by a store employee punctured a pipe containing refrigerant for the store's refrigerators and freezers shortly after 2:30 p.m., sending a plume of toxic fumes into the building at 895 E. H St., Chula Vista Deputy Fire Chief Harry Mun said.

Firefighters evacuated employees and customers from the building, sending them at least 300 feet away and ordered the store to be closed for the rest of the day, Mun said. 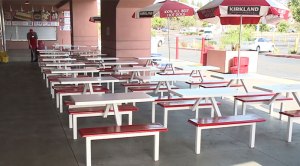 Two people were released after being seen by paramedics and three others were still being evaluated at the scene, Mun said. The two patients who were sent to a hospital were in a mild status, Mun said.

Refrigerant is an irritant that can cause someone who inhales too much of it to become light headed, dizzy or nauseous, according to Mun.

The store was expected to open as scheduled Monday.

SANTA YSABEL, Calif. (CNS) - A 62-year-old driver of a van was killed Monday in a head-on crash on a back-country roadway near Lake Henshaw.

The fatal wreck occurred shortly before 9 a.m., when a southbound 2018 Ford T250 van veered over a set of double yellow lines into the path of an oncoming 2007 Ford F450 truck on state Route 79, south of state Route 76 in Santa Ysabel, according to the California Highway Patrol.

CHULA VISTA, Calif. - Four firefighters were injured including one with second-degree burns as crews responded Monday to a fire at a commercial building in Chula Vista.

Four workers also were inside the Action Footwear retail store in the 600 block of H Street, though all made it out safely on their own, according to the Chula Vista Fire Department. Crews were called to battle the fire just before 5:45 p.m.

SAN DIEGO -- The effects of a strong winter storm were felt throughout San Diego County Monday.

The second of three storms expected in the area brought lots of snow to the mountains and you didn’t have to drive far from San Diego to find it. It was snowing just past Alpine off Interstate 8 east at an elevation of 2,000 feet, about a 30-minute drive from San Diego.

The worst — and best — states for driving