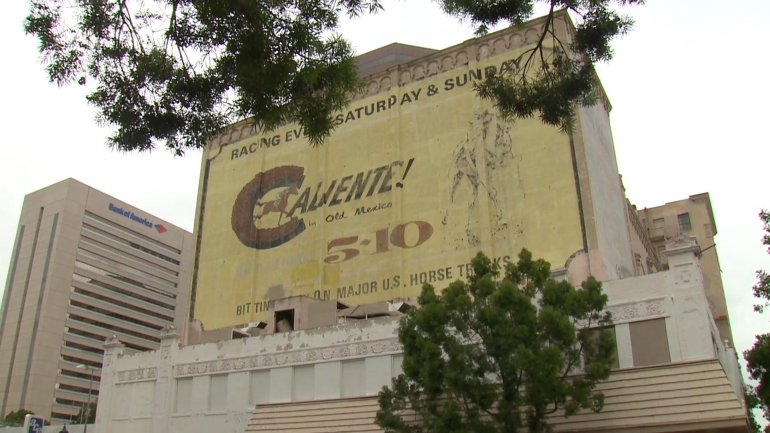 SAN DIEGO — A plan to replace the dilapidated California Theatre building in downtown San Diego with a 40-story skyscraper was unanimously approved Tuesday by the City Council.

The fenced-off building on C Street between Third and Fourth avenues has long been a civic eyesore, with the exception of a large, historic mural touting the Agua Caliente racetrack in Tijuana.

It will be replaced by a mixed-use development consisting of an office tower, 282 residential units, retail space and parking. The first nine floors will be constructed to closely resemble the theater building’s appearance in its heyday, with some minor differences in materials, said K. Cyrus Sanandaji of San Francisco-based developer Presidio Bay Ventures.

“The idea, really, is to revitalize C Street by reinvigorating life downtown,” Sanandaji said. “We a 9-to-5 downtown and we should really be a 24- 7 downtown where we can live, work and play.”

The 2,200-seat theater building opened in 1927 as a vaudeville stage before it became a movie house, according to city documents. After 1976, it remained open for special performances, but architectural surveys that took place in 1990 deemed the building vulnerable to earthquakes.

The building was subsequently closed to the public and has sat unused ever since.

“It’s been sitting there shuttered for 25 years,” said Kris Michell, president and CEO of the Downtown San Diego Partnership.

She said the project was “desperately needed” to breathe life into C Street, the corridor where the trolley runs in the downtown area.

Opponents contended that city officials ignored alternative proposals that would have preserved the theater, some of which could have also provided office space and housing. They pointed out that San Diego’s historic features are rapidly disappearing.

Councilman Scott Sherman responded that the building wouldn’t have remained vacant for so long if the alternatives were feasible.

Sanandaji said construction would start as soon as the city issued the necessary permits.