Skip to content
Close
You have been added to 4 p.m. Afternoon News Newsletter

INGLEWOOD, Calif. – Los Angeles Chargers held a kickoff event Wednesday, but they must not be over being in San Diego yet. 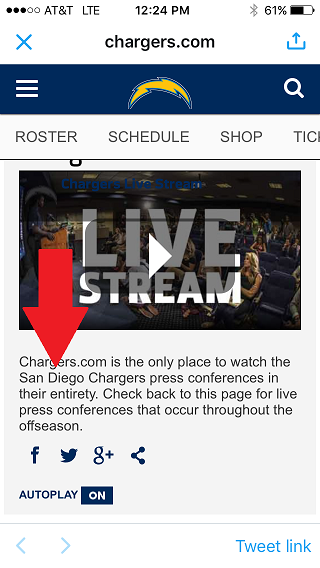 Chargers.com sent an alert letting fans know they could watch a live stream of their kickoff event in “San Diego.”

The message underneath the video player read:

Fans were rowdy and chanted “LA Chargers” and applauded everything that was said.  Although, one fan shouted during Spanos’ speech and was escorted out.

Rivers joked that he was wearing cowboy boots and that the fans would have to get used to that. He asked fans to let the players ease into the new location noting that the team hasn’t won much in the last year.

Rivers "i hope ya'll are ok w blue jesns and cowboy boots cause that's what you're gonna get😎" @fox5sandiego pic.twitter.com/tFaTWG3wNL

FOX 5 Sports reporter Jordan Whitley attended the rally and posted videos and pictures to Twitter. Here are some of her highlights:

#chargers Kick-off event full. Fans who rsvp'd late r waiting in line in hopes of getting in. ID must match invite @fox5sandiego pic.twitter.com/ZwercUxJjS

(NEXSTAR) – The Playboy Mansion was full of things that go bump in the night, according to one of Hugh Hefner’s ex-girlfriends — and they weren’t the things you’re imagining.

Bridget Marquardt, a former Playboy bunny and one Hefner’s many ex-flames, recently revealed that she once saw an apparition in her bedroom at the Playboy Mansion.