SAN DIEGO — Pet owners in Pacific Beach are warning their neighbors after one cat was shot and another received a threatening note.

Hugo Feu said he discovered Wednesday a piece of paper taped to the collar of his cat, Lygher.

“It says, ‘this kitty’s going away with his new PB friends on the 1st of September,’” Feu said.

The next day, he said, Lygher’s collar vanished.

Feu said he and his wife have been so worried they have been taking off work to stay at home with him.

“We’re really concerned now because every time he goes out we don’t know what’s going to happen,” Feu said.

Just days earlier, that fear became reality for a couple not far down the road.

Someone shot their cat, Atticus, with a pellet gun.

“I gasped so loud. I was shocked,” Atticus’s owner Carol Scaringelli said. 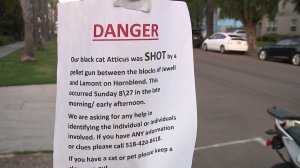 Fortunately, a doctor was able to remove the bullet. Atticus is now back home recovering.

“He got extremely lucky. It was actually very close range. It hit his femur. Completely broke his femur. Went through his bladder and into his stomach,” Scaringelli said.

It is unclear if the person who shot Atticus is the same one who left the threatening note on Lygher’s collar.

“But either way, someone is out there threatening animals and hurting them, possibly trying to kill them,” Scaringelli said.

It is a chilling remark that comes at a time when several neighborhood cats have disappeared.

“We’ve had cat posters up around our neighborhood for like the past month. There’s just an overwhelming amount. Something that we normally don’t see,” Scaringelli told FOX 5.

These pet owners do not want to scare their neighbors, but instead, want to educate them about what is going on.

Scaringelli said she has filed a police report.

A GoFundMe page has been set up to help Atticus’s owners pay for his medical expenses.