(CNN) — Egypt hit back Monday with airstrikes aimed at ISIS-affiliated jihadists in Libya who are believed to have killed 21 Egyptian Christians, including about a dozen whose beheadings are featured in the organization’s latest video.

Egyptian F-16 jets took off in the early hours of Monday to bomb ISIS camps, training areas and weapons depots in Libya, the Egyptian military said.

“Avenging Egyptian blood and punishing criminals and murderers is our right and duty,” it said in a statement broadcast on state television.

The Egyptian Foreign Ministry said that the airstrikes targeted ISIS locations in Derna.

“Leaving the situation as it is in Libya without a firm intervention to curtail these terrorist organizations would be a threat to international peace and security,” the ministry said.

It wasn’t immediately clear how much damage and casualties the airstrikes might have caused.

The bombing raids came after ISIS released a gruesome video Sunday that appeared to show the beheadings of the Egyptian Christians on a beach.

The footage, bearing many of the hallmarks of previous ISIS videos of the slaughter of hostages, has intensified international concerns about ISIS’ deepening reach into countries far beyond its strongholds in Syria and Iraq.

The slickly produced video shows the apparent mass killing, with jihadists in black standing behind each of the victims, who are all dressed in orange jumpsuits with their hands cuffed behind them.

Twenty-one Egyptian Christians were kidnapped in the Libyan coastal city of Sirte in two separate incidents in December and January. They were reportedly from impoverished villages and went to Libya looking for work.

Although the ISIS video showed around a dozen men being beheaded, Egyptian officials said that all 21 Christians were believed to have been killed. 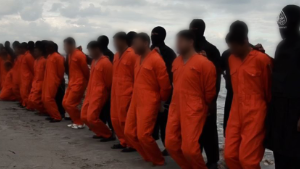 Some of the hostages cry out “Oh God” and “Oh Jesus” as they are pushed to their knees.

The five-minute video, released by ISIS’ propaganda wing al-Hayat Media, includes a masked English-speaking jihadi who says, “The sea you have hidden Sheikh Osama bin Laden’s body in, we swear to Allah, we will mix it with your blood.”

The video threatens Egypt, which shares a long border with Libya, and also Europe, whose shores lie across the Mediterranean Sea.

‘The right of retaliation’

Egyptian President Abdel Fattah el-Sisi had warned Sunday that his country “reserves the right of retaliation and with the methods and timing it sees fit for retribution for those murderers and criminals who are without the slightest humanity.”

He also declared a week of mourning in the Muslim majority nation for the dead Christians.

In a statement, Egypt’s Foreign Ministry called for other nations battling ISIS to support Egypt’s efforts and to target terrorists in Libya, as well.

Egypt is already fighting against ISIS-allied militants on its own territory in the Sinai Peninsula, where dozens of people were killed in a series of attacks in January.

Concern has increased over ISIS’ rising influence in Libya amid the power and security vacuum prevalent in the country since the 2011 uprising that overthrew former dictator Moammar Gadhafi.

CNN reported in November that fighters loyal to ISIS had complete control of the city of Derna, which has a population of about 100,000 and is situated not far from the Egyptian border.

Jihadists with allegiance to ISIS had also expanded their presence westward along the Libyan coast, forming chapters in cities including Benghazi, Sirte and even Tripoli, the capital, according to Noman Benotman, a former Libyan jihadist now involved in counterterrorism for the Quilliam Foundation.

In an example of the group’s spreading reach, a Libyan branch of ISIS claimed responsibility for a deadly attack on a luxury hotel in Tripoli that killed 10 people, including one American.

“There’s been a real radical Islamist presence in Libya for some time,” said Lt. Col. Rick Francona, a retired U.S. Air Force intelligence officer. “What’s worrying is now they are self-identifying with ISIS.”

Questions remain over how much direct command and control the ISIS leadership in Syria and Iraq has over its North African affiliates.

The killings of the Egyptian Christians has filled in some of the detail. Before the grisly video was released, ISIS had released photos in its English-language magazine Dabiq, claiming they had been killed.

“There’s certainly communication between the Libyan affiliate and the affiliate in Syria about matters of importance to both of them,” said CNN national security analyst Peter Bergen.

He said the ties between Libyan jihadists and ISIS’ precursor, al Qaeda in Iraq, “go back a very long time.”

The links between the different branches present “a real challenge” for Western leaders, Francona said, as U.S. President Barack Obama asked Congress toformally authorize the use of military force in the war against ISIS.

“While we can come up with a military solution or a military operation in a restricted area like Syria and Iraq, what do we do when it expands to North Africa?” Francona asked.

CNN’s Ian Lee and Yousuf Basil contributed to this report.