INDEPENDENCE, Mo. -- In this season of giving thanks, one student shows what generosity is all about. When one young lady from Missouri found a financial windfall, she gave it to others in need, overlooking her own needs.

Phoebe Brown, 7, says she knew exactly what she'd found, and how best to use it. The second grade student from Sycamore Hills Elementary School in Independence was shopping with her mother at the Hy-Vee store on U.S. Highway 40 on November 9th when she found a winning lottery ticket on the floor inside the store. 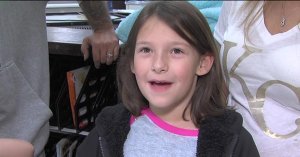 The Brown family says Phoebe often picks up discarded lottery tickets. They were already at a gas station down the street when she realized she'd found a winner.

The numbers were already scratched off that Missouri Lottery ticket, which bore the logo of the Missouri Tigers, and Phoebe knew a winner when she saw one.

"I saw that lottery ticket and it had a two on the back. I thought I'd better pick it up, and I told my mom it was a winner,” Phoebe told FOX 4 News.

Rather than to spend it on herself, young Phoebe decided to help others.

Sycamore Hills Elementary School has been collecting canned goods for the less-fortunate, as part of the Independence School District's 150th anniversary. Phoebe decided to donate the money to feed others. School district leaders say the Browns bought $100 worth of groceries at a local store to add to the room filled with donations.

“There have been times where I've been out of work, and we had nowhere to stay and our family's taken us in, and helped us out. We're thankful for our friends and our family,” Joshua Brown, Phoebe’s dad, said.

And as a promise, the school's gym teacher, Herb Horseman, allowed the entire second grade to shave his long, bushy beard - Phoebe's donation helped them win that prize.

”You're welcome and I hope you have a happy Thanksgiving,” Phoebe said.

Phoebe told FOX 4 News her parents also taught her to be thoughtful and kind to others. Her contribution at the holiday season will go toward providing meals for families who couldn't otherwise afford to celebrate Thanksgiving.

All told, the Sycamore Hills kids collected over 1,700 canned goods and household items. Second graders at the school accounted for 541 of those donations. School officials say they'll all go to help less fortunate families within the Independence School District.

ISSAQUAH, Wash. -- If you frequent the Costco food court for cheap hot dogs and pizza, but you are not a member, you aren’t going to be able to do that for much longer.

Costco says buying items from the food court has always required a membership.

WASHINGTON (CNN) -- Wells Fargo was hit with a $3 billion fine Friday by federal authorities outraged by the millions of fake accounts created at the troubled bank over many years.

The settlement with the Justice Department and Securities and Exchange Commission, years in the making, resolves Wells Fargo's criminal and civil liabilities for the fake-accounts scandal that erupted nearly four years ago.