The following blog will be updated daily throughout a 10-day BorderReport.com Tour. A team of journalists will travel more than 1,700 miles across four states telling impactful and unique stories along the US-Mexico border. The tour started Sunday, September 22 in San Diego and will end Tuesday, October 1 in Brownsville, Texas.

Where the border wall begins in San Diego, you’ll find two very different places. The American side centers around enforcement and border agents. On the Mexican side, you’ll find commerce like a Walmart, Starbucks and Dairy Queen.

Despite the different landscapes between that portion of San Diego and Tijuana, there’s a park at the border that brings people together. This is especially true on Sundays when they hold a cross border church celebration.

Anna Wiernicki filed this unique look at the service — and how plans were disrupted Sunday due to an incident.

As noted at the bottom of Sunday’s blog, you’ll see two walls in Friendship Park. It’s not uncommon to see Mexicans peering through the steel beams. On the U.S. side, people aren’t allowed to walk directly up to the fence.

Friendship Park closed its gates at 2 p.m. They’ll open again next Saturday for people to have the opportunity to greet friends and loved ones in Mexico.

At this point, only a few people remain in the U.S. side of the park. However, parkgoers in San Diego can smell what’s cooking on the other side of the wall. Loud music and the smell of freshly cooked food fill the area.

Two very different scenes on each side of the border wall in San Diego.

Because of what was described by Border Patrol agents as an “incident,” Pastor Fanestil had to conduct Sunday service through two walls. He spoke on the American side of the border through a speaker on the Mexican side.

Some people in San Diego who came hoping to take part in the service expressed frustration while looking on from afar.

A few minutes from now, Pastor John Fanestil will co-host a cross-border church service. He’ll stand on one side of the border wall presenting the service while a Mexican pastor does the same on his side of the wall.

In most cases, only 10 people are allowed into the service on the U.S. side. Others will outside of a gate and look on. Dozens are expected to participate in Mexico.

In this clip, Pastor Fenestil describes the history of serving communion at the wall.

.@jfanestil tells @AnnaEWiernicki the history of serving communion on Sundays at the US-Mexico border. #BorderReport pic.twitter.com/s8LcXj9Tjt

One very unique thing about the border wall in San Diego: it comes right out of the ocean. Photojournalist Ozzie Carrillo captured these standout images of the 18-foot high structure.

PIC: @JulianDFW sits down with @Border_Angels to discuss the issues they see regularly on the US-Mexico border. #BorderReport pic.twitter.com/YZheC5u7KV

Our first stop was at Friendship Park which is located inside Border Field State Park in San Diego. During select times on the weekends, people can walk directly up to the wall to potentially interact with loved ones and family members.

At Friendship Park in SD watching people in Mexico swimming while few on US side are. Sign explains why, Border Patrol says Mexican side not as contaminated. #borderreport pic.twitter.com/Je3tgIX3HR

Our journey along the US-Mexico border begins in San Diego where President Trump visited Thursday to tout new border wall construction that replaced an easily comprised portion of fencing built in the 1990s.

The 14 miles of wall was originally proposed by the Obama administration and funded by the Trump administration in 2017. This fencing is 18 feet tall and been labeled a “world class security system” by the president.

During Thursday’s stop in San Diego, Trump highlighted features of the wall, which he said have been studied by three other countries. He said the wall absorbs heat — “You can fry an egg on that wall.” The concrete goes deep into the ground to prevent tunneling. And agents can see through it to spot possible threats on the Mexican side of the border, he said.

“When the wall is built, it will be virtually impossible to come over illegally, and then we’re able to take border control and put them at points of entry,” Trump said.

Construction actively continues on a secondary fence in San Diego. This portion features 30-foot beams. It’s roughly 20 feet north of the primary wall. Construction is expected to be complete in January 2020. 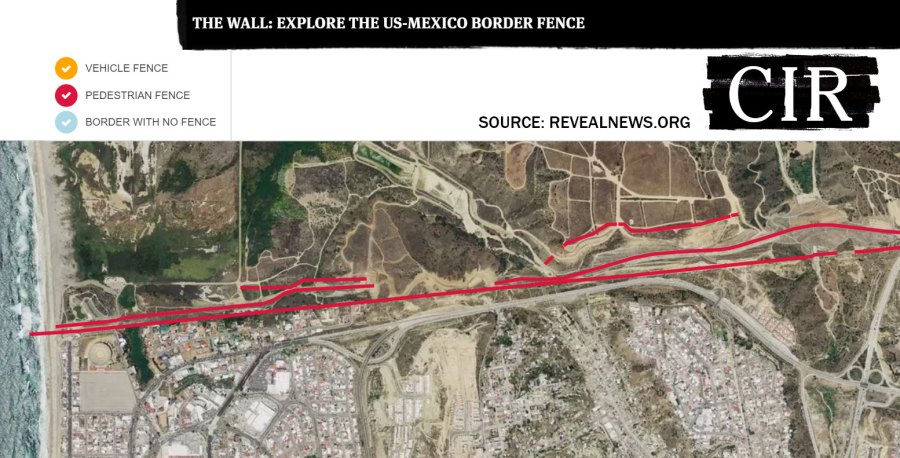 Mapping from Reveal News and the Center for Investigating Reporting shows the intricate layers of fencing along the border in San Diego. The barriers in and around San Diego are pedestrian fences.

RELATED LINK: The barriers that make up the border wall

(The Associated Press contributed to this update)

Visit the BorderReport.com homepage for the latest exclusive stories and breaking news about issues along the United States-Mexico border

DENVER (KDVR) — Colorado search and rescue teams are responding to a viral social media post that they say perpetuates misleading information that could complicate their missions.

The post, which has been shared thousands of times across Facebook, Instagram and TikTok, among other platforms, encourages people who are stranded or lost while hiking to change their voicemail message to include their location, the time, the date and their situation.

Spin, a micromobility provider, and TransLoc, a transportation software solutions company, are teaming up for the project.

SACRAMENTO, Calif. (KTXL) — One lucky kitten owes its nine lives to a man in Sacramento after he saved it from floodwaters on Sunday.

Skip Cambell jumped to action outside his home in Cottage Park when his wife heard a commotion outside.

What exactly is a ‘wealth tax’ and how would it work?

Are you owed money? County seeks to refund $713,585 in unclaimed cash