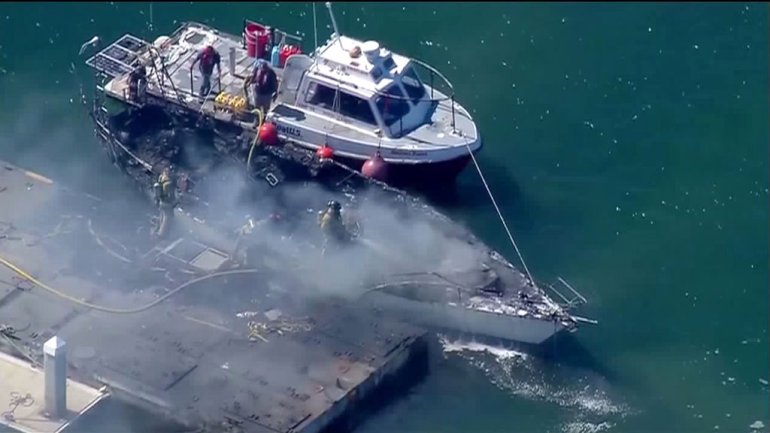 CHULA VISTA, Calif. — A boater managed to escape injury Friday when his sailboat became engulfed in flames for unknown reasons during an outing on San Diego Harbor, authorities reported.

The man was taking his 51-foot vessel to Shelter Island to have work done to it when it began burning offshore from Chula Vista, said Jeff Peter, a battalion chief with the South Bay city’s fire department.

“So he wisely jumped in the water,” Peter said.

A fellow mariner who was nearby and saw what was happening took the stranded man aboard.

It took harbor police and Coast Guard personnel about a half-hour to extinguish the blaze, which gutted the sailboat. The smoldering hull then was towed to a nearby boatyard, where firefighters from Chula Vista and National City doused the remaining embers.

The vessel was believed to be a complete loss, Peter said.

The burger restaurant was reportedly fined four times, totaling $1,750, in recent weeks for the same health order violation, according to health officials.

Paras, who had a smash hit in 2015 with "Trumpkin," an image that went around the globe, followed it up last year with a massive Baby Yodakin with 10-feet-long ears.

Dave Chappelle willing to meet with trans groups, but has demands

(NewsNation Now) — Comedian Dave Chappelle said he would meet with trans workers at Netflix after their criticism of his recent special, "The Closer," but was far from conciliatory in a video released on his Instagram page.

"I said what I said, and boy I heard what you said. My God, how could I not?" the comedian said on stage.

Dave Chappelle willing to meet with trans groups, but has demands