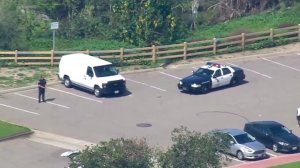 The park is at the intersection of 40th Street and Alpha Street, a few blocks from Alicia Grove Way and 37th Street, where the July 28, 2016, shootings happened.

"Members of the San Diego Police Department's homicide division are following up on some investigative leads and conducting a further investigation here at the park behind me for activities that may be related to the officer De Guzman murder as well as the attempted murder of Officer Irwin," Runyon said.

Investigators were seen using metal detectors and placing yellow evidence flags in the grass. It was unclear what, if any, evidence was found.

Gomez, 56, was scheduled to appear in court next week for a status conference.