Dozens protested and spoke out at a public meeting with the hope to wipe out the curriculum altogether and come up with something new.

“To have adults talk to sixth graders about sexual pleasure — too much. To send them to websites where they can learn to ask for consent in a sexy way — not appropriate,” said Ashley Bever, a parent and substitute teacher in the district.

Parents stood before the board with their concerns, each asking for a change to what’s been a hot-button issue since the curriculum was adopted in 2016 and includes graphic cartoons featuring the characters “Julie Melons” and “Miles Long.” Some attendees even rapped to get their message across.

“Purity’s chance for each girl and boy. Instead, it will make them each others’ toy. Too much, too soon. With fists in the air, parents cry out, ‘does the board even care?’,” one mother chanted.

Before the meeting, many of the same parents rallied outside the district doors in a rally to “opt their children out” of the district’s sex ed curriculum, claiming it’s too sexy.

District officials say they adopted the same programs used in major cities and in local districts including Oceanside Unified School District. However, parents who showed up from Oceanside said they aren’t OK with the curriculum either.

“Kindergartners went through all of these lessons on ‘you deserve to know what your body parts are’ and ‘you have the right to know these things’ and as parents, we’re not OK with it,” said Sara Walker from Oceanside.

The district says the program was constructed in compliance with the new California Healthy Youth Act, but parents, including some attorneys, are saying hold on.

President Kevin Beiser told FOX 5 the curriculum was built with parents’ input. He said with kids learning everything on the Internet these days, the new curriculum will help them make healthy choices, including abstinence. He also said parents have the option to opt out.

San Diego Unified School District officials said they were open to further discussion on this topic. They sent FOX 5 this letter from July 2017: 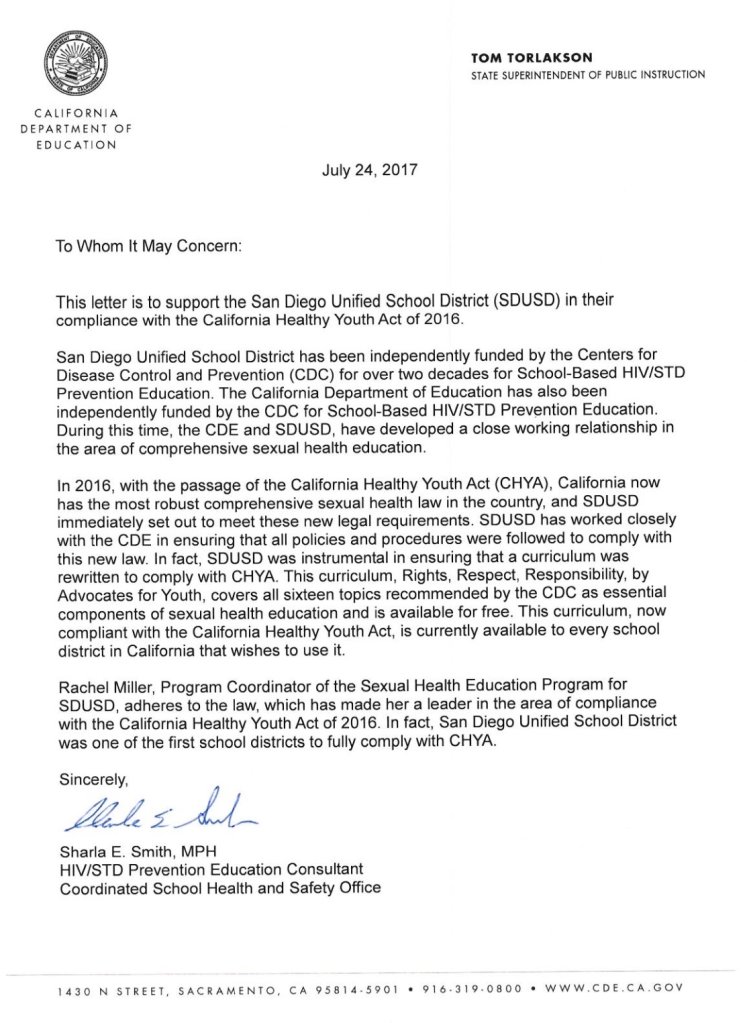 App To Save Lives From Fentanyl Overdoses