SAN DIEGO -- A 21-year-old man was arrested today on suspicion of shocking a jogger with an electric stun gun on a University City roadside while making a failed attempt to abduct her.

Rahimi Baba Sheikhali Shayan, also known as Shayan Rahimi, allegedly got out of a parked car and confronted the 23-year-old woman as she was running alongside Nobel Drive near Regents Road about 12:30 p.m. Wednesday, according to San Diego police. 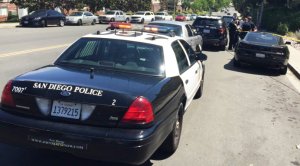 He allegedly held the stun gun against the victim's chest, reached behind her with his free hand and tried to pull her into a nearby parked a parked car, Officer Luis Roman said.

The jogger, who felt a burning sensation, responded by screaming, kicking the assailant and pushing him away. She then ran out into the nearby traffic lanes and flagged down a passing motorist, who let the victim into her car before continuing on out of the area, Capt. Mark Hanten said.

When the women had traveled what they considered to be a safe distance from the site of the crime, the driver pulled over and let the victim out to await the arrival of police.

Tips from the public helped lead detectives to the suspect, who was taken into custody late this morning, according to Hanten.

Authorities hoped to identify and contact the motorist who came to the victim's aid, the police captain told reporters.

SAN DIEGO (CNS) - San Diego County has reported another 142 cases of COVID-19 and no additional deaths, bringing the county's totals to 6,701 cases and deaths remaining at 249.

Woman hospitalized after being shot in Vista parking lot