— 8 a.m. ET: At least 15 people have been killed by gunmen who attacked a Kenyan university Thursday, the Kenyan Interior Ministry said. As many as 550 others are unaccounted for at the campus that had about 815 students total, according to CNN affiliate Citizen TV. The Kenyan Red Cross said at least 50 students have been freed.

— 6:22 a.m. ET: One terrorist was arrested as he tried to slip through the security cordon and flee the scene, officials said, according to Citizen TV.

A swarm of gunmen stormed a Kenya university before dawn Thursday, firing indiscriminately and taking hostages.

At least 15 people were killed, the Kenyan Interior Ministry said. As many as 550 others are unaccounted for at the campus that had about 815 students total, according to CNN affiliate Citizen TV.

As many as 50 students were freed, and at least 65 people were hospitalized from the attack atGarissa University College, the Kenyan Red Cross said.

Okari said he was told to take cover as hundreds of students fled, some crawling.
The Somalia-based Al-Shabaab militant group claimed responsibility for the assault. Security and ministry officials said one terrorist was arrested as he tried to slip through the security cordon and flee the scene.

Kenyan forces cleared three of four dormitories and had cornered the militants in the last one, the interior ministry said.

Garissa is about 145 kilometers (90 miles) from the border with Somalia. Al-Shabaab militants have often launched attacks inside Kenya ever since the Kenyan government sent troops across the border to fight the group. 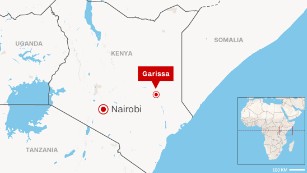 Waking up to terror

The gunshots started going off “like fireworks” around 5 a.m., at the time of morning prayers, witness Milka Ndung’u told NTV. She and others escaped to a field, but gunshots followed them.

Augustine Alanga told CNN he woke up to the sound of gunfire and described students running around, seeking safety. 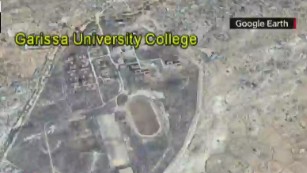 Assailants forced their way onto the campus by shooting at guards at the front gates, Kenya National Police said.

From there, attackers moved into a nearby girls’ hostel, the Red Cross said.

It’s not clear how many gunmen were on campus.

“We don’t know how many there were, but there are probably more than 10,” said Robert Alai Onyango, a blogger in Nairobi. “We believe the attackers were wearing something close to military fatigues.”

Onyango said the attackers appeared to be shooting indiscriminately and “basically from all angles.”

“They surrounded the mosque … we don’t know why they were surrounding the mosque,” Onyango said.

“We are saddened & angered by today’s terrorist attack @ #Garissa Univ.,” the U.S. Embassy in Nairobi tweeted. “Our deepest condolences 2 family/friends of victims.”

The university was established in 2011 and is the only public university in the region.

There are normally 800 students in the dormitories when school is in session, Jackstone Kweyu, dean of students, told Citizen TV. There are 1,000 staff members on a normal work day, he said. And there are usually four guards at the campus gates overnight.

The Kenyan Red Cross and the country’s health ministry are organizing a blood drive to help the victims.

The dangerously porous border between Somalia and Kenya has made it easy for Al-Shabaab militants to cross over and carry out attacks.

The deadliest assault by Al-Shabaab in Kenya was in September 2013, when the group attacked the Westgate shopping center in Nairobi, killing 67 people.

What is Al-Shabaab, and what does it want?

Last month, the U.S. Embassy warned of possible attacks “throughout Kenya in the near-term” following the reported death of a key al-Shabaab leader, Adan Garaar.

“Although there is no information about a specific location in Kenya for an attack, U.S. citizens are reminded that the potential for terrorism exists,” the warning said.