A more important question than “Is a hot dog a sandwich?” has been answered by a federal trade court: Is a Snuggie a blanket?

Per Bloomberg BNA, the answer is yes, meaning that, at least for tariff purposes, the cozy, fleecy coverings aren’t considered to be “robes or priestly vestments” and so shouldn’t be taxed at the higher apparel rate. 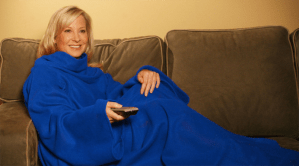 That was the Justice Department’s argument, which was struck down Friday by the Court of International Trade’s Judge Mark Barnett. He pointed out the Snuggie is promoted by maker Allstar Marketing Group more like a blanket than clothing—its packaging even calls it “the Blanket With Sleeves!”—and that the smiling people sporting it in ads are usually in situations where one would use a blanket, including in bed or while sitting in the cold at a sports event.

Quartz notes that the battle between Allstar and the Justice Department on the Snuggie’s status has been waged for nearly a decade, with the DOJ insisting that, because the Snuggie has sleeves, it resembles “clerical or ecclesiastical garments and vestments” and “professional or scholastic gowns and robes.” But Barnett accepted Allstar’s argument that, unlike said robes and gowns, the Snuggie doesn’t have any closures to seal up the open back.

The sleeves, Barnett added, were simply to keep the Snuggie from sliding off the user, while still allowing the user to do things with his or her hands.

The difference in tariff price? Importers bringing in the Snuggie as a blanket will need to pay 8.5% in duty tax instead of 14.9%. (Still no word on the Necky.)

This article originally appeared on Newser: A Court Just Ruled on What a Snuggie Actually Is