There were no survivors in the crash, the official said, adding that the crew of a second helicopter flying alongside did not report seeing signs of hostile fire when the helicopter went down.

Multiple U.S. defense officials told CNN the aircraft was a HH-60 Pave Hawk helicopter, a Black Hawk variant. They said the helicopter was not on a combat mission at the time. 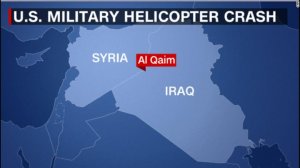 The U.S.-led coalition fighting ISIS in Syria and Iraq said Thursday that an investigation was underway to determine the cause of the crash.

LOS ANGELES (CNS) - A sheriff's deputy was assaulted Sunday morning shortly after 2 a.m. in the unincorporated Westmont area of South Los Angeles, and a suspect was in custody, a department official said.

The female South Los Angeles Station deputy was trying to stop a vehicle at Vermont Avenue and West 97th Street when the suspect attacked her and drove off, according to Deputy Trina Schrader of the Sheriff's Information Bureau.

SAN DIEGO (CNS) - Health officials in San Diego County have reported 386 new COVID-19 infections, bringing the total to 54,314 since mid-February, but no new deaths, according to the San Diego County Health and Human Services Agency.

The last new death was reported Thursday, which pushed the overall total to 868.

In a surprise announcement from his studio window to faithful standing below in St. Peter’s Square, Francis said the churchmen would be elevated to a cardinal’s rank in a ceremony on Nov. 28.