ESCONDIDO, Calif.  –All three surviving victims of Saturday’s synagogue shooting have been released from the hospital, officials said Sunday, while the suspect in the deadly attack remained jailed and was due to be arraigned Wednesday.

Friends and neighbors identified the woman who was killed as 60-year- old Lori Gilbert Kaye of San Diego and said she died a hero for trying to protect the rabbi after the suspect, 19-year-old John T. Earnest of San Diego, opened fire as about 100 people worshipped at Congregation Chabad synagogue during the last day of Passover.

“Lori, you were a jewel in our community, a true Eshet Chayil, a Woman of Valor,” her friend, Audrey Jacobs, said in a Facebook post that was reprinted on the Jewish Journal’s website. “You were always running to do a mitzvah (good deed) and generously gave tzedaka (charity) to everyone. Your life was defined by your good deeds.”

Jacobs and other friends said Kaye jumped in front Rabbi Yisroel Goldstein as the gunman opened fire with an AK-15 assault rifle Saturday morning. Goldstein, 57, suffered  wounds in the index fingers on both hands, but reportedly continued his sermon.

“Your final good deed was jumping in front of (Rabbi Goldstein) to take the bullet and save his life,” Jacobs wrote. She said Kaye is survived by her husband and a 22-year-old daughter.

Earnest was being held without bail at San Diego Central Jail. He’s scheduled to be arraigned at 1:30 p.m. Wednesday on one count of murder and three counts of attempted murder.

A 34-year-old man — identified as Almog Peretz, who was vising from Israel at the time, according to media reports — and an 8-year-old girl were also wounded. Peretz and Goldstein were being treated at Palomar Medical Center in Poway.

Palomar Medical Center spokeswoman Bobette Brown said she had no updates on injuries, but that both men had been released from the hospital Sunday morning.

The girl was first treated at Palomar and later taken to Rady Children’s Hospital, where she was released Saturday night, hospital spokesman Carlos Delgado said. Her name wasn’t released, although Jacobs said the young girl’s first name is Noya and that moved with her family to San Diego from the Israeli city of Sderot a few years ago.

The Israeli World News described Peretz as a hero for ushering several children to safety amid the gunfire.

“This is sad, but I am originally from Sderot so we know a bit about running from the Kassam rockets,” Peretz told Israel’s Channel 12 from his hospital bed. “There were many small kids next to me. I took a little girl who was our neighbor and three nieces of mine and ran. I opened the back gate and we ran with all the children to a building in the back. I hid them in that building.”

Noya’s father Israel told Israel Radio that he had moved his family to California a number of years ago after their Sderot home absorbed several rocket shots from Gaza over the years, injuring him once.

“We came from fire to fire,” he said, adding, “It can happen anywhere. [But] we are strong.”

Earnest, who was reportedly on the Dean’s List at Cal State San Marcos, apparently posted an “open letter” online shortly before the shooting, taking credit for both the Poway synagogue shooting and a suspected arson fire on March 24 at the Islamic Center of Escondido. The letter makes multiple anti-Semitic references and racist comments.

“We are dismayed and disheartened that the alleged shooter now in custody is a CSUSM student,” Haynes said. “CSUSM is working collaboratively with the San Diego County Sheriff’s Department to assist and gain more information.

“We extend our deepest condolences to all of the victims, their families, friends and our entire community. We share your grief,” Haynes said. ” This despicable act is entirely against our values as a university. We stand in solidarity with the Jewish community and reject the rhetoric of divisiveness that feeds hatred.”

San Diego County Sheriff William Gore said authorities were working to verify the authenticity of the letter. Investigators couldn’t confirm whether the alleged shooter is connected to any white supremacist groups. But the sheriff said Earnest has no prior arrests.

Gore said deputies served warrants for Earnest’s home and car as well as the synagogue.

Authorities believe Earnest to be the only suspect, and said there were no further known threats to religious gatherings.

“We encourage our communities to continue with scheduled events and other activities as normal,” the sheriff’s department said in a statement Saturday night. “The suspect in the  Poway incident today has been captured and we believe he acted alone.  Of course, if you have information about any potential threats, we want to hear from you.  We have assigned deputies to religious centers throughout the weekend and will continue in our patrols and outreach moving forward.”

The shooting began shortly after 11:20 a.m., when the suspect burst into the Congregation Chabad synagogue and opened fire as services were underway.

His gun apparently malfunctioned sometime during the attack, according to Gore.

An off-duty Border Patrol agent working as a security guard was inside the temple when the shooting began, and he opened fire as the suspect fled, Gore said.

The agent did not strike the suspect, but did hit the suspect’s car, authorities said.

Police said the suspect called 911 a short time later and said he had been involved in the shooting.

A San Diego police officer en route to the scene of the shooting spotted the suspect’s vehicle and pulled him over nearby, San Diego Police Department Chief David Nisleit said.

The suspect got out of his vehicle with his hands up, and was taken into custody without further incident, Nisleit said. 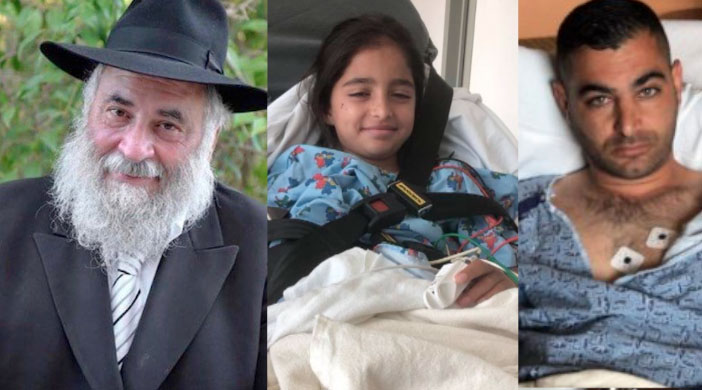