SAN DIEGO — A 15-year-old boy, last seen boarding a trolley at the Gaslamp at about noon Saturday, was being sought as a missing person at risk, police said.

Angel Adonai Reyes, who is non-verbal, went missing when his father lost sight of him on the trolley platform, according to Sgt. Robert Hawkins of the San Diego Police Department. He boarded the Green Line trolley.

Reyes was carrying a white backpack with black letters. He was wearing a green T-shirt with “Stein Education Center” printed on the front. He wore grey pants and was wearing sandals. Reyes is Hispanic, 5-feet-6 inches tall, weighing about 230 pounds with brown eyes and black hair.

Police asked that anyone with information on Reyes’ whereabouts call the police department at 619-531-2000. 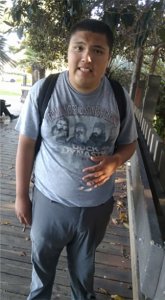