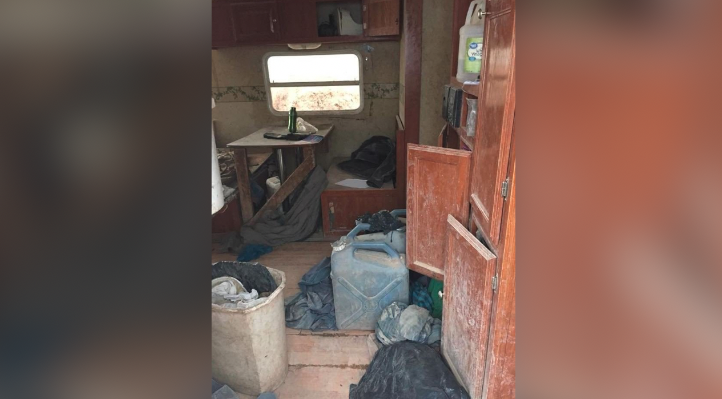 TAOS, N.M. — The 11 children were so famished, the sheriff said, they “looked like third-world country refugees.”

But they weren’t found in an underdeveloped country. They were discovered in a remote New Mexico compound where an underground trailer kept them hidden from the outside world.

“The only food we saw were a few potatoes and a box of rice in the filthy trailer,” Taos County Sheriff Jerry Hogrefe said.

“But what was most surprising and heartbreaking was when the team located a total of five adults and 11 children that looked like third-world country refugees not only with no food or fresh water, but with no shoes, personal hygiene and basically dirty rags for clothing.”

Authorities were tipped off to the scene in Amalia, near the Colorado border, after someone forwarded a message believed to be from a third party. The message said, in part, “we are starving and need food and water.”

After executing a search warrant Friday, officers found 11 children ranging from ages 1 to 15, along with three gaunt women believed to be their mothers. The three women were taken into custody for questioning and were released, officers said.

An AR-15 rifle, loaded 30-round magazines, four loaded pistols and many rounds of ammo were found in the makeshift compound that included a small travel trailer buried in the ground covered by plastic with no water, plumbing, or electricity, the sheriff’s office said.

Wahhaj was wanted for the abduction of his 3-year-old son Abdul Ghani Wahhaj in Georgia, authorities said. He was booked with no bond because of a warrant out related to his missing son.

Morten was charged with harboring a fugitive.

It was not immediately clear whether Morten or Wahhaj had attorneys. They have not yet made their first appearances in court.

The sheriff said the toddler Wahhaj is accused of kidnapping was not one of the 11 children found at the compound. CNN has reached out to the woman believed to be the missing child’s mother, but has not received a response.

SAN JOSE, Calif. (AP) — Worried that an earthquake could collapse a big dam south of San Francisco, officials have ordered its reservoir to be completely drained by October to reduce the risk of floodwaters spilling into Silicon Valley.

The 240-foot (73-meter) high earthen Anderson Dam, built in 1950 between San Jose and the community of Morgan Hill, poses too great a risk of collapse and must be fully drained by Oct. 1, according to the Federal Energy Regulatory Commission, which regulates dams, the Mercury News reported.

SAN DIEGO (CNS) -- The slaying of a 22-year-old man a year ago in the Lincoln Park area remains unsolved, and authorities reminded the public that $10,000 in reward money is available for information leading to an arrest.

Emergency personnel responded at 11:11 p.m. on Feb. 24, 2019, to a report of a person down in the 300 block of 47th Street and found Gregory Ruffin Jr. suffering from upper body trauma, according to San Diego police.