SAN DIEGO – A driver was killed and a female passenger injured after a high-speed crash early Saturday morning in downtown San Diego.

According to Harbor Police, at about 2 a.m. the driver of a vehicle, described by witnesses as a Lamborghini, was speeding north near the 900 block of North Harbor Drive when the car left the roadway, hit a palm tree and became engulfed in flames.  A female passenger was ejected into the street.

A witness who did not want to show his face on camera told FOX 5 he made eye contact with the driver at a stop light just moments before he sped away and then burst into flames.  Arial Batara said he’s shaken after witnessing that Lamborghini slam into a palm tree and burst into flames.

“Last person to see him alive because we had eye contact at the stoplight… when we stopped and it’s the only time he stopped,” said Batara.  “A lime green Lamborghini flying 180, 200 miles an hour right by you and it’s like pretty much nothing you can do. You see somebody burning alive and moving and you can’t do anything. Just basically you’re just watching just basically die slowly it’s like a candle melting you can’t do a darn thing about it.” 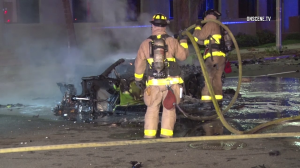 A Harbor Police officer who was near the scene at the time of the crash assisted the injured passenger until an ambulance arrived and transported her to a hospital. Her condition is not known.

The driver was pronounced dead at the scene.

An attorney and a number of friends of the victim and driver of the car stopped by the crash scene and identified him as medical marijuana business man 33-year-old Mike Llamas of San Diego.

The cause of the crash is under investigation.