LOS ANGELES – Nominations for the 90th Academy Awards were announced Tuesday amid what’s proving to be an unpredictable and highly political awards season.

The fantasy film “The Shape of Water” led with 13 Academy Award nominations on Tuesday, including best picture.

The the other best picture nominees are “Lady Bird, “Three Billboards Outside Ebbing, Missouri,” “The Post,” “Get Out, “Dunkirk,” “Darkest Hour” “Call Me By Your Name” and “Phantom Thread.” 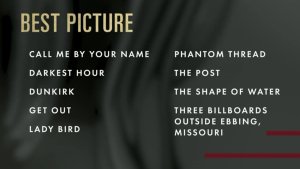 Best actor nominees are Gary Oldman for “Darkest Hour,” Timothée Chalamet, for “Call Me By Your Name,” Daniel Day-Lewis for “Phantom Thread,” Daniel Kaluuya for “Get Out ” and Denzel Washington for “Roman J. Israel, Esq.”

Best actress nominees are Frances McDormand for “Three Billboards Outside Ebbing, Missouri” Saoirse Ronan for “Lady Bird,” Sally Hawkins for “The Shape of Water,” Meryl Streep for “The Post” and Margot Robbie “I, Tonya.”

Greta Gerwig, who wrote and directed the coming-of-age story “Lady Bird,” is also the fifth woman ever to be nominated for a best director Oscar

They were joined in their category by Guillermo Del Toro for “The Shape of Water”, Christopher Nolan for “Dunkirk” and Paul Thomas Anderson for “Phantom Thread.”

With her nomination for best supporting actress for her role in “The Shape of Water,” Octavia Spencer makes history as the first African- American actress to receive multiple nominations after a win. Spencer won in that category for “The Help” in 2012.

The Oscars come as the entertainment industry reckons with sexual harassment and gender inequality issues, unleashed by allegations against producer Harvey Weinstein and a host of others.

The Academy’s accounting firm PwC, which calculates the Oscar ballots and secures the winner envelopes, have announced new procedures for the ceremony to avoid another envelope mixup. Human error at last year’s show led to “La La Land” mistakenly being named the best picture winner before the actual winner, “Moonlight,” was announced.

Actor in a leading role

Actress in a leading role

Actor in a supporting role

Actress in a supporting role

Museum: ‘Dukes of Hazzard’ car with Confederate flag to stay

VOLO, Ill. (AP) — A northern Illinois auto museum has no plan to stop displaying a Dodge Charger from the “Dukes of Hazzard” television show with the Confederate battle flag painted atop the vehicle.

Statues of Confederate generals and soldiers are being taken down across the country, NASCAR has banned the flag from its races and the Confederate emblem is being removed from the Mississippi state flag.

Kanye West announces plans to run for president in 2020

The rapper tweeted on Saturday that he is running for president.

Although there are some states in which it is too late for West to add his name to the ballot, he is still able to join the race as an independent in others.

The artist even received some high profile support from Elon Musk and Mark Cuban.

PHILADELPHIA (AP) — In a nearly empty Philadelphia courtroom in June 2015, a lawyer for Bill Cosby implored a federal judge to keep the comedian’s testimony in an old sexual battery lawsuit under wraps. It was sensitive. Embarrassing. Private.

U.S. District Judge Eduardo Robreno had another word for it.