LOS ANGELES — Actor Robert Guillaume, best known for his title role in the TV series “Benson,” died Tuesday at his home in Los Angeles. He was 89. 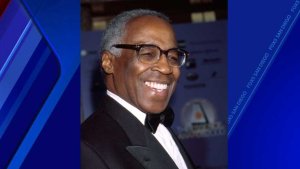 “He kinda went the way everyone wishes they could, surrounded by love and in his sleep,” Guillaume said.

She added that her husband really loved making music, entertaining and making people laugh. He treasured his role as Rafiki in Disney’s 1994 animated film “The Lion King,” she said.

Guillaume starred as the level-headed butler Benson DuBois on the sitcom “Benson” from 1979 – 1986. He won the Emmy for outstanding lead actor in a comedy for his performance in the role in 1985. Dozens of TV roles followed, including turns on “A Different World” and “Sports Night.”

Guillaume is survived by four children, all of whom had spent time visiting with their father in his final weeks, Donna Guillaume said.

“He was a good father and a good husband. He was a great, great person,” she said.

SPRING VALLEY, Calif. - A pedestrian was hit and killed by a teenage driver in a Volvo Friday night in Spring Valley, California Highway Patrol officers said.

According to CHP, the crash happened at approximately 7:09 p.m. on Sweetwater Road north of Saint George Street. Officers say the pedestrian was hit when he stepped out from the sidewalk to cross the street and wound up "directly in front of the Volvo."

CHULA VISTA, Calif. -- The monthlong Republic Services sanitation workers' strike may be over, but the cleanup effort continues in San Diego and the South Bay.

Signs of progress can be seen throughout Chula Vista as more and more trash is hauled away after the stalemate between Republic Services and some 250 union workers came to a close Monday. But even with trash service resuming, many customers wonder about refunds after paying for a month with no service.

Deputies say gunfire was reported around 7:20 p.m. on Diamondback Drive near Blackhorse Drive, east of state Route 67. Authorities found two men suffering from gunshot wounds there. Both were taken to a local hospital, where they died, according to the department. Neither man was publicly identified.