Zurich, Switzerland, April 22, 2022 (GLOBE NEWSWIRE) -- Leveraging the blockchain, the seven (7) super rare Fananees NFTs come in partnership with ANCORE Strategy and AFTERMEDIA. The “Legendary” rarity release in Ramadan of the seven (7) characters consists of individual Fananees with properties of the highest rarity of 0.01 - 0.07%. 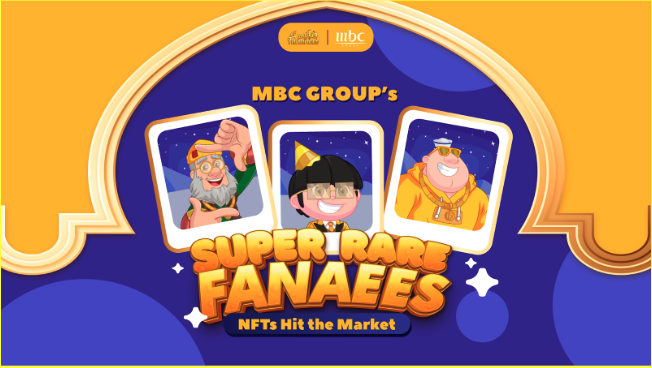 This Ramadan, MBC GROUP, is releasing seven (7) super rare NFTs from its Fananees (NFT) Genesis Collection - to be auctioned at OpenSea – thus leveraging modern technology like the blockchain. The “Legendary” rarity release of the seven (7) characters consists of individual Fananees (NFT) with properties of the highest rarity of 0.01 - 0.07%.

MBC GROUP, the largest and leading media group in the Middle East and North Africa (MENA), had initially announced the Fananees (NFT) Genesis Collection offering over 200 different attributes with varying rarity levels in March 2022, in partnership with ANCORE Strategy — a technology and marketing advisory firm based in Zurich, Switzerland; and AFTERMEDIA — the commercial and business development media company. The NFT collection is purposely released in the month of Ramadan, celebrating the MENA region's diverse and rich cultural heritage.

The Fananees (NFT) Genesis Collection serves the growing NFT community in the MENA region, offering fans an opportunity to own their favorite characters as digital collectibles. The Fananees (NFT) illustrations are created by a reputable graphic and motion design agency behind famous Paramount and Nickelodeon cartoons.

“’Fananees’ is one of the most successful and well-known animations in the Arab world, with some of the most recognisable characters. In this era of constant innovation, we want to be at the forefront of emerging opportunities in NFTs, blockchain, and the metaverse. We are committed to driving innovation, and I'm optimistic that this first step into the NFT age will pave the way for MBC GROUP to expand its presence in the realm of digital IPs.”

At a later point, the Fananees NFTs will be integrated into MBC GROUP's existing games. Additionally, NFT holders will be entitled to incredible offline benefits, connected to MBC GROUP’s ever expanding media ecosystem

"It is exciting to help drive the NFTs strategy for MBC GROUP. The "Fananees'' TV Series is already popular in MENA, garnering millions of views during Ramadan. The launch of the Fananees Genesis Collectibles is monumental for NFTs in the region, especially as we explore how Fananees will be integrated in gaming and possibly, even more use cases in the metaverse.”

On his part, AFTERMEDIA's Founder and CEO, Hani Ghorayeb, stated:

"NFTs will shape the media and content industries in the coming years. We are at the forefront, creating the environment for technology companies to join hands with global brands such as MBC GROUP to heighten the level of viewers’ engagement. The Fananees NFT collection is a showcase which best serves the interests of MBC GROUP and its global viewers’ base."

With three decades of creating iconic brands and producing ground-breaking, award-winning content, MBC GROUP is the leading media organization in the MENA region.

AFTERMEDIA aims to provide Media with the most efficient sales strategies to attract buyers and increase revenue.

ANCORE Strategy is a leading technology and go-to-market advisory focused on building turnkey solutions at a lightning-fast speed.