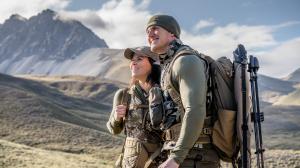 Social Media Stars, Josh and Sarah Bowmar Have All Hunting Violations Against Them Dismissed After A Nine-year Battle To Clear Their Name.

Since this case began, we have been under constant surveillance and despite that, we have not had one single poaching charge brought against us.”
— Josh Bowmar
LINCOLN , NEBRASKA, UNITED STATES OF AMERICA , January 25, 2023 /EINPresswire.com/ -- (Nebraska) Social media stars, record-setting bowhunters, and couple-preneurs, Josh and Sarah Bowmar out of Ankney, Iowa who’ve been in the limelight recently as part of a federal investigation related to hunts they conducted with a Nebraska outfitter, announce that all hunting violations against them have been dismissed after a nine-year battle to clear their name.

Josh states, “Since the investigation began in 2014, nine years ago, we have been under constant surveillance and scrutiny, and despite that, we have not had one single baiting or poaching charge brought against us other than the Nebraska case, and even those charges were dismissed due to lack of substantial evidence.” Sarah and Josh were only charged with the misdemeanor of one count of conspiring to violate the Lacey Act, a federal law enacted in 1900 that bans trafficking in fish, wildlife, or plants that are illegally taken, possessed, transported, or sold. In their specific case, they had planned to take their hunt home from Nebraska to Ohio, where they lived, which violated the act. Had they lived in Nebraska and taken their hunted quarry out of state, they would only have been charged a $75 fine. But ONLY since they were from out of state, hunting in Nebraska, and then planning to return to Ohio with their quarry, did it become a federal crime. As such, their punishments were much more severe and included three years of probation and community service plus a $133,000 fine.

The Lacey Act is a relatively unknown federal law. Sarah said, “Josh has hunted his whole life, and I also have my hunting license and have taken a hunter’s safety course, and neither of us had ever heard of the Lacey Act before hunting in Nebraska. That’s not an excuse, we accept accountability for our ignorance here, but the average hunter either doesn’t know about this act or doesn’t fully understand the ramifications. We hope to educate on the Lacey Act to help other hunters avoid this situation in the future.”

The couple believes the media attention they’re receiving because of this case, not because of the depth of their involvement, but because of their notoriety. While the charges against the outfitter, its owners, and clients involved 100 animals, Sarah and Josh Bowmar’s involvement consisted of only two deer and a wild turkey, and again they were cleared of the hunting charges. Among the group, the Bowmar's 3 million combined social media following made them, “The big fish in this space,” as Sarah states.

The Bowmars agreed to plead guilty to the conspiracy charge because they thought it was fair. Josh states, “We should have paid more attention to what was going on with other clients at that outfitter, and for that, we rightfully plead guilty to conspiracy against the Lacey Act. But it doesn’t mean we committed any acts of ill will; we didn’t. It’s simply that we hunted with someone we should have known more about and should have known better and about potentially taking our quarry across state lines after the hunt was over.”The outfitter at the source of the investigation came highly recommended. The couple got in contact with the outfitter because they were interested in hunting mule deer which are not found in Ohio, where they lived at the time. Josh had always dreamed of hunting this type of deer, and it was a new challenge for both of them. What’s more, they wanted to connect with others in the bowhunting community, and this Nebraska outfitter came highly recommended by others in the bowhunting community. However, in the three times in which they visited this outfitter during 2015 and 2017, Josh and Sarah only caught two white tail deer and a wild turkey. Unbeknownst to the Bowmars, the outfitter was the subject of a multi-year sting operation by the Nebraska Fish and Game Association. They found themselves in the wrong place at the wrong time, hunting with the wrong people and became caught up in the same net that involved 33 other clients of the outfitter who were eventually charged with various violations, such as baiting and poaching.

The Bowmars are still committed to making a difference in the hunting world and beyond. To date, the power couple has donated upwards of $300,000 of their branded supplements to nurses, teachers, and individual first responders; $279,000 worth of their products to military bases, hospitals, and police stations; and $1.4 million to food banks. They have donated almost $2 million worth of products to organizations they value and care about. The Bowmars also partner with O.U.R. (Operation Underground Railroad) to assist in the detection and arrest of child sex offenders and traffickers. To introduce more people to the great outdoors, in 2020, they co-created Kids in the Outdoors, which allows children from inner-city schools to immerse themselves in nature through day-long, fun-filled activities, such as archery and fishing. They are also vocal advocates for ethical hunting methods and promoters of the Dallas Safari Club’s anti-poaching efforts.

This document is in reference to
Case No. 8:20CR178
United States of America vs. Josh Bowmar, Sarah Bowmar, and Bowmar Bowhunting, LLC