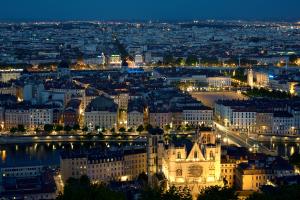 Lyon - This weekend, Scientologists in Lyon gathered to celebrate the 40th anniversary of the Church of Scientology's presence in Lyon.

Scientologists have always been open to cooperating with the authorities and they do that by respecting the separation of Church and State, in line with France’s constitutional concept of secularism”
— Ivan Arjona Pelado

LYON, FRANCE, November 24, 2022 /EINPresswire.com/ -- Scientology celebrates its 40th Anniversary in Lyon, France. The Church of Scientology has existed in the country for over 60 years and opened its premises in Lyon, Place des Capucins, 40 years ago. The celebration of the anniversary of the church was attended by participants from the city of Lyon as well, Paris and other places in France. It began with an excerpt from a lecture given by founder L. Ron Hubbard in the 1960s on the bridge to spiritual freedom.

Then, during the retrospective of the past 4 decades, souvenir photos were presented on a musical background to the great surprise of the guests, accompanied by admiration and bursts of laughter.

It is clear for Scientologists that “spirituality must have a provoked impact in improving society everywhere and for all, Scientologists or not” said Arjona, President of the European Office of the Church of Scientology for Public Affairs, who congratulated them for 40 years of “fighting social injustices, fighting the hell of drugs, rising values through The Way to Happiness, and teaching citizens grown and young their human rights”. It is in recognition of this that attendees were informed of the social actions that the church volunteers are carrying out with persistence, for a better Lyon.

Not blind to the current needs of society, volunteers conceived new plans to bring all these secular actions to a higher level of impact, to improve the quality of life of all people in the community.

Scientologists have always been open to cooperating with the authorities and they do that by respecting the separation of Church and State, in line with France’s constitutional concept of secularism, in which the State recognizes no religious denomination (See Dogru v. France (2009) 49 EHRR 8, §18) but is due to protect the freedoms and rights of all, even the right to contribute to a better France for all.

All religious communities in France carry out their activities in the form of associations under the Law of 1901 on Associations and/or under the Law of 1905 on Separation of Church and State* and the Church of Scientology is no exception. It has duly registered churches in both forms, clearly stating their religious and liturgical aims. As such, the Church’s formal legal status in France is no different from that of other, mainstream religious groups, such as Catholic, Protestant, Muslim and Jewish communities. (See, e.g., Cha’are Shalom Ve Tsedek v. France [GC], no. 27417/95, §§ 22, 45 and 46, ECHR 2000 VII).

Other surrounding countries have different systems to ensure the right of people to freedom of belief by protecting them with a special status, such as Spain and Portugal, where Scientology is fully recognized and enjoys good relations with state officials and administrations, or the Netherlands where Scientology is also recognized as a religion and the Ministry of Finances recently recognized the Church and all its activities as of public benefit for everyone and for all.

Experts around the globe have also clearly stated that Scientology and its churches can be anything other than religious entities. For example, Christian Vonck. A PhD, Rector, Faculty for Comparative Study of Religions, Antwerp, Belgium said that “For scholars in the field of the history of religions, sociology, and/or comparative religion, there is no doubt that Scientology is a religion.”

Also, in an expert report originally published in 1999, Dr Urbano Alonso Galan outlines—“in an objective and scientific view of the matter”—four aspects that demonstrate Scientology’s rich and inherent religious nature: philosophy and doctrine, ritual, ecumenical orientation, and a final purpose or objective in terms of salvation. Dr Galan’s analysis is all the more powerful due to its theological comparisons of Scientology with other religious traditions, such as Buddhism, Hinduism, Christianity, Islam and Judaism.

In the final analysis, he concludes, "From my viewpoint as a theologian and philosopher, and having studied the religion of Scientology in its writings and practices, I can strongly affirm that Scientology is a religion, in the very fullest sense. … The roots of Scientology (Buddhism and the Vedas) already point out that one can only through complete knowledge of oneself commence to know and love God.”

Urbano Alonso Galan, PhD, worked as a theologian and philosopher in Madrid (Spain) and earned a doctorate in philosophy and licentiate in theology (cum laude) from the Gregorian University and the Saint Bonaventure Pontifical Faculty, both in Rome and shortly after became a moderator at the Ecumenical Congresses directed by the Vatican and in this capacity worked with Pope John XXIII and Pope Paul VI. It is his experience and knowledge of religion that allowed him to affirm that salvation, for Scientologists “is made possible by Scientology auditing and training, which allows the individual to gain greater knowledge and certainty about the place of one’s self in relation to other features of life known to Scientologists as the Eight Dynamics.”

Scientology, emerged as a new religion, founded by L. Ron Hubbard in 1952, and opened its first church in Los Angeles in 1954, reaching nowadays more than 11000 churches, missions and social betterment groups in 196 countries.