The latest additions to the industrial complex in Santa Teresa, New Mexico, include a 175,000 square-foot building for Taiwanese electrical wire manufacturer Admiral Cable; a 183,000 square-foot structure built by El Paso billionaire Paul Foster; and the $40-million expansion of a Union Pacific swap yard a few miles from the Mexican border.

That’s in addition to the ongoing $9.88 million remodeling of the Santa Teresa Jetport; the planned new 2,400 linear feet of in-house railroad tracks; and the state’s $46 million investment to tear down the asphalt on the Pete Domenici Highway to replace it with concrete — from the Texas-New Mexico state line to the Mexican port of entry. 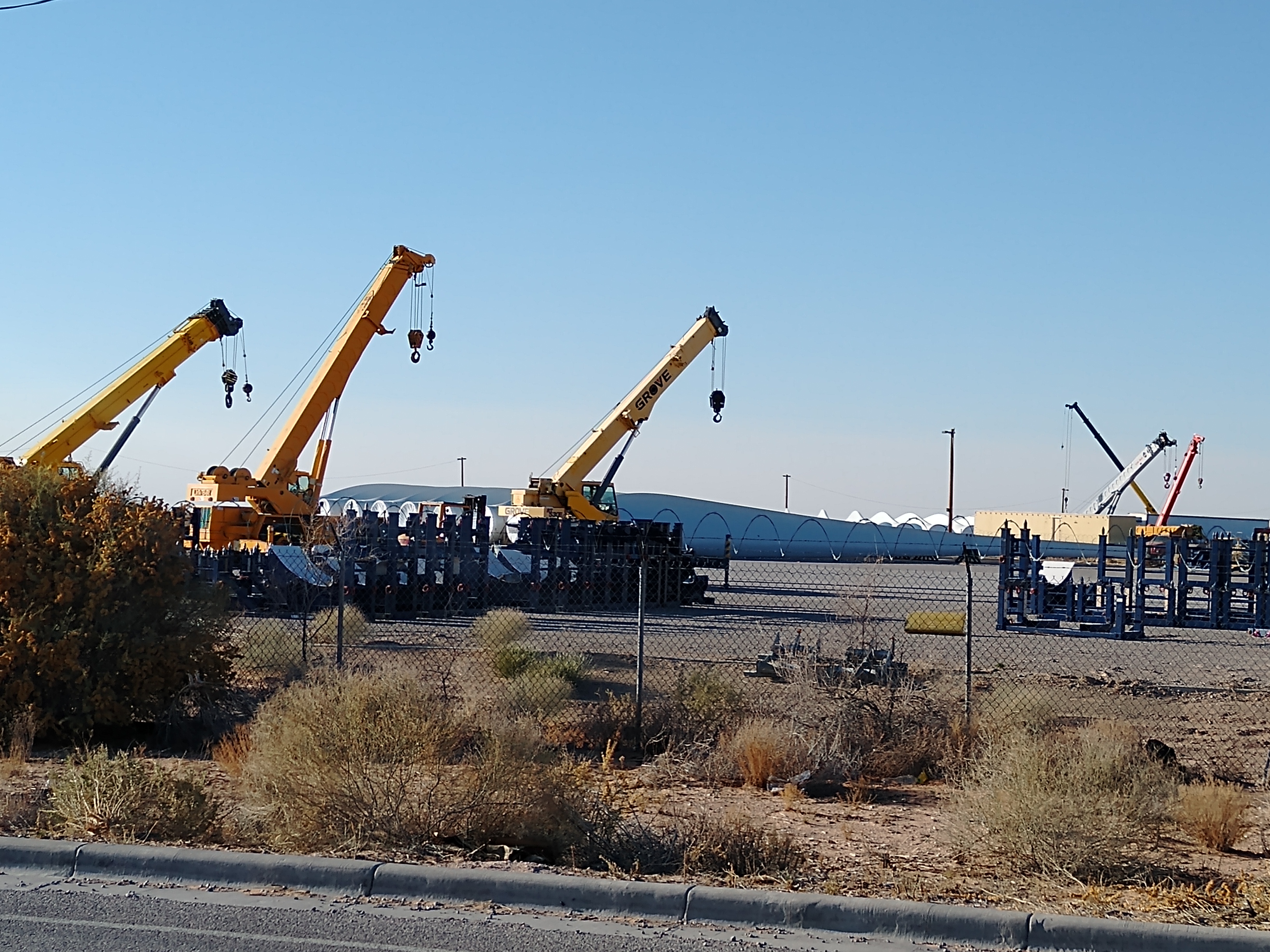 Cranes at the Santa Teresa Industrial Complex stand ready to load the next batch of trucks that will be transporting raw materials to manufacturing plants in San Jeronimo, Mexico, or finished products to consumer centers in the Midwestern United States. (photo by Julian Resendiz/Border Report)

“That new infrastructure is going to bring even more growth. We want to make sure we’re working in step with state leaders and be ready for it,” said Jerry Pacheco, president and CEO of the Border Industrial Association.

The airport is undergoing improvements on its runway to allow for the landing of cargo airplanes of up to 96,000 pounds. Some sections of the runway currently can support no more than 20,000 pounds, and there’s no cross-runway to accommodate heavy wind currents.

“We’re trying to make sure it’s sturdy enough to hold the cargo jets, we’re adding new lighting and fixing up the taxiways from the hangars (to the runways),” Pacheco said, adding that the planes will be able to deliver merchandise in hours as opposed to next-day delivery with trucks. “The most important part is that we have $1 million out of that money to create the design for the cross-runway. It’s easier to get the matching funds if you essentially have a shovel-ready project.”

The industrial complex at Santa Teresa, some 15 miles west of El Paso, Texas, already supports more than 5,000 jobs. It’s “twin” across the border, San Jeronimo, Mexico, will be up to 9,500 jobs when the new Sunrise Confections candy manufacturer begins operations in the next few weeks, Pacheco said. The complex includes four industrial parks, the airport, a Union Pacific intermodal station, thousands of undeveloped acres and a nearby port of entry shared with Mexico.

The complex got its start in the mid-1990s and has quickly gone on to surpass many commercial ports of entry along the Southwest border. Santa Teresa ranks ninth in terms of cross-border truck traffic and fifth when other metrics such as cargo volume, exports to Mexico and rail activity are taken into account. Most of the tenants in Santa Teresa are light manufacturing or warehousing operations, transportation and logistics companies catering to Mexican maquiladora manufacturing centers.

Other companies are eyeing Santa Teresa for relocation and a recent trade mission to Taiwan raised interest among Asian companies with offers for strong tax incentives, area businesspeople said.

“Taiwanese companies are looking into this region. One has a copper operation in Juarez, Mexico, and wants to have its warehouse over here. They already have some land under contract,” said Hidelberto Moreno, director of land development and sales for Ironhorse Resources Inc., an Illinois-based logistics and business development company that works closely with Santa Teresa clients.

Copper cable is in high demand in the United States — for products such as extension cords for household products — but Asian companies find it difficult to compete because of tariffs, so their alternative is to produce their product in the United States. “If they don’t produce it here in America, they’re out of the market. Their margin isn’t good if they send it from Taiwan or China, that’s why they have to mass-produce it in America,” Moreno said.

He added that Union Pacific’s intermodal rail operation has become a big incentive for companies to do business in Santa Teresa. “They bring in their materials, do some light manufacturing and send it out across the country from here,” he said. 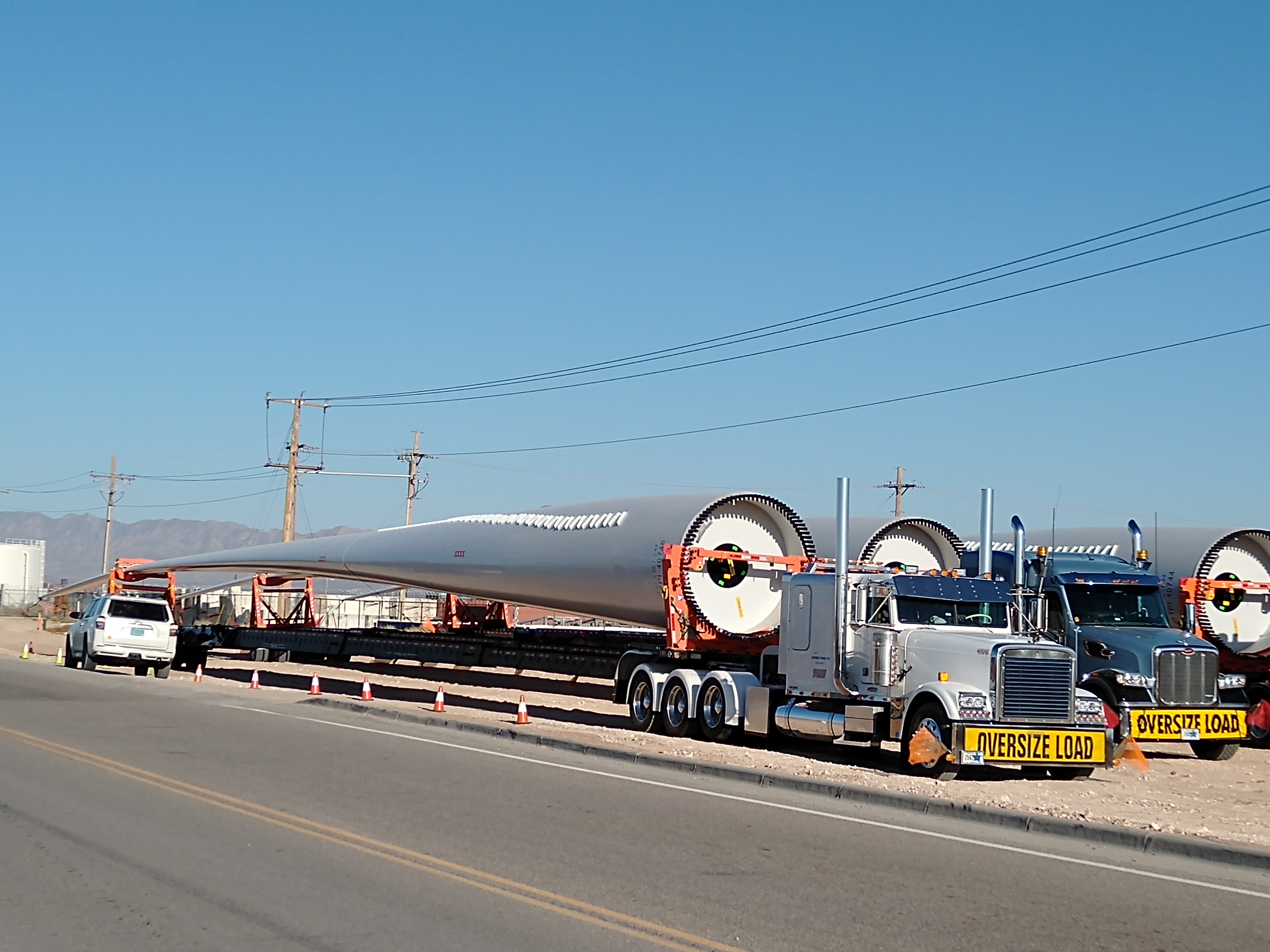 Blades for wind turbines that were manufactured in Juarez, Mexico, await clearance at the Santa Teresa Industrial Complex for delivery to the Midwest. (photo by Julian Resendiz/Border Report)

Metals also are big at this industrial complex, as hundreds of gigantic blades for wind turbines cross the Santa Teresa port of entry each month from Mexico on their way to wind farms in Texas, Oklahoma and the Midwest. Steel beams that go into building the Trump administration’s border wall are stored here. And a metals recycling plant moves more and more of its operations here from its base in Downtown El Paso.

“Last year they built 20 miles of border fence from Santa Teresa out to the West. The steel has started arriving a month ago because they’re going to build another 40 miles toward Columbus, New Mexico, and 15 miles west of Columbus (next) year, so we’re talking about more than 50 miles of steel for the border fence we’re getting ready to receive here in Santa Teresa. That’s good timing for the region,” Moreno said.

“The state of New Mexico has been very aggressive with incentives for companies. We’re very optimistic with the synergy we are creating in the region. We are expecting more companies will land in this region in the next two to five years and we’re excited about that,” Moreno said.

Get the latest breaking news with FOX 5 on Twitter.